Tossa de Mar rekindled my faith in the Mediterranean. For many years I had been despairing as the towns and villages around this tremendous sea were gradually being consumed by blandness. That gradual but powerful neutering that overwhelms individuality and turns each beach resort into an identikit duplication of each other.

Towns that had character now morphed indistinguishably into one another; travel brochures highlight the same attractions of sandy beaches, vibrant nightlife and endless sunshine. One resort becomes another.

There are, of course, exceptions, after all, the Mediterranean is a large sea. However, they become harder to find, and more difficult to reach. And then there is Tossa. I don’t usually try to write “puff pieces”, but having spent a little time in the town, I can’t really resist.

Tossa de Mar is a small Catalan community lying in the middle of the Costa Brava some 100 kms to the north of Barcelona. It is, in short, accessible and lying within one of the most popular tourist regions in Europe. It has, however, retained its soul. Its growth has been obstructed by geography, tradition and the strength of the local community to direct the town’s future.

Tossa is old. There are Roman ruins, and ample evidence of an active community here some 2,000 years ago, but the dominant and irresistible historical authority comes from the picturesque and poised castle that overlooks the town. Built in the 12th century, this magnificent castle grew to encompass a medieval town, now sympathetically restored to its 14th century appearance. As the local population grew in the 15th and 16th century, houses popped up outside the castle, and the community of Tossa emerged into the pattern it shows today. Small winding streets creep around the bay and offer tourists a glimpse into the soul of the past.

The front street has, of course, restaurants, but the buildings, including the hotels date back to the 1950s and beyond; the temptation to knock them down and replace them with a shiny new hotel or “tourist complex” has been resisted, and Tossa is all the better off for it. 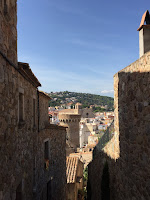 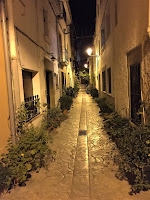 
There are many places to stay; mostly small, family hotels, and the Hotel Tarull is a fabulous example. The property, built in the 1950s is run by Lluis Soler Capdevila and his delightful wife Meri. Lluis is a third-generation hotelier, and it shows. His attention to detail and to the whims, needs and interests of his guests is remarkable. New guests are presented with a map of the town with his restaurant suggestions already hand written, along with notes of supermarkets and other interesting spots. His choices of places to eat were formidable, and the variety and quality of food available in this small community is surprising. 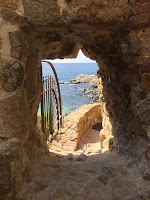 Too often beach-resort restaurants offset a fine view with mediocre food; menus that offer identical choice, often frozen and served with little enthusiasm but great expense. To be sure, these types of mountebanks exist in Tossa as well, but there are gems. Casa Igor, run by a Michelin star chef, Simó Tomàs Vallvé who retired from the pressure of Barcelona to run a small, twenty cover restaurant here, is simply fabulous. The combination of local ingredients, a small menu and an enormous imagination is an extraordinary find.

Another Tossa institution is the Restaurant Bahia; located on the front, and at first indistinguishable from it less memorable neighbours, this third-generation family restaurant is quite simply a wonderful place to eat. Their food is well cooked, well presented, most agreeably served and quite imaginative. The stream of regulars is a testament to their place in Tossa, and any visitor eating there finds a sense of what Tossa means to its people.

And there are about 6,000 of them; fewer in the winter months and more in the summer, but about 6,000 overall. Proud Catalans with the sense of confidence and dignity that a millennia of history will cultivate. It is a community of ancient traditions like the annual forty-kilometer pilgrimage el Vot del Poble undertaken each year since the 1400s to give thanks for delivering Tossa from the scourges of the Bubonic Plague.

Tossa de Mar is a town that knows its history and can see its future. It is a town that seems to have managed to find the elusive balance of tourism today, that point between the needs and interests of the local community and the desires and expectations of their visitors. It is a community that has earned the respect of its tourists, and one that will certainly delight new visitors for many years to come. 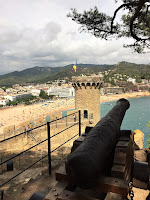 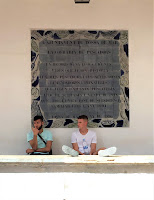 Posted by MaxGlobetrotter at 6:07 AM 4 comments: Links to this post