Llivia; its position in life

Thanks to my astute readers - Llivia is, of course, an Exclave and not an Enclave.

Posted by MaxGlobetrotter at 5:11 PM No comments: Links to this post

Llivia - A Spanish Enclave in France 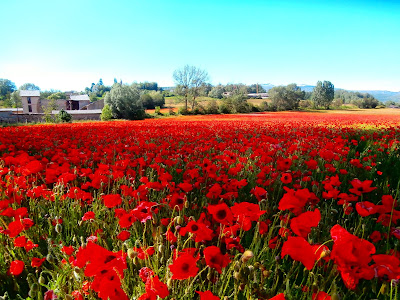 The first thing that one notices on the rather short drive to Llivia is that there is a fork in the road; to the right lies the French town of Bourg Madame, a menacing although now inactive border control post and the road into France. The fork to the left aims one at "Llivia", a small sign, and the road, almost parallel to the other leads into a vast acreage of poppies. Not, I suspect, of the recreational Afghan type, but extremely beautiful, and deeply surprising.

The road travels virtually adjacent to the French Fork, and in fact, one is driving across French soil for a couple of miles before entering "Llivia - "The Spanish Enclave within France" as the sign professes. It actually says this in Spanish, but I felt that a translation would be in order.

The enclave's peculiar status derives from the Treaty of the Pyrenees, negotiated in 1649 to determine the border between France and Spain; towns within the region were ceded to France, but as the treaty stipulate that villages were to become French, and Llivia was considered a city, it remained Spanish. The status came not from size, it only has and had a population of about 1,500, but because it was the ancient capital of Cerdanya. Cerdanya, to add a further layer of complication to the administrative quagmire of the region, is the name given to an historical land straddling the Spanish/French border,  and forming one of the counties of Catalunya. 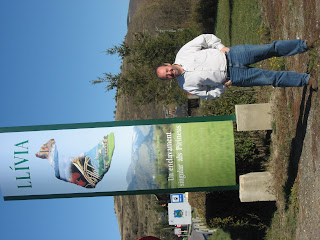 Regrettably, I don't know how to rotate pictures here, however you will get the gist of it. 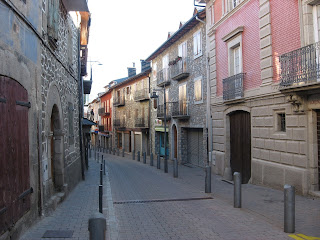 Llivia itself is not mesmerising, but unusual, and quirky; its position within France, gave escaping allied forces an easier target to aim for as they tried to get to Spain, but once in Llivia, they still had the pesky issue of the last three miles of the "international" road, a designation that one imagines was not recognised on a daily basis.

It is, however, well worth a stop, and if one is there at the right time of day, the Cal Cofa restaurant is well worth a visit; so far, I have only managed coffee.

From Llivia, the drive home was beautiful, interesting and not unlike many other drives in this part of the world. The scenery of the Languedoc, and the region of Cerdanya in particular offers exploring  visitors an endless series of small gasps, and images of countryside, village life and history unmatched in most other places.

Posted by MaxGlobetrotter at 4:18 AM 15 comments: Links to this post