Of Panama, Bolivars and COPA: Days one and two of the Gondwanaland Redux expedition

When one is a points junkie like me, travel routings become secondary to the availability of the elusive redemption seats. Coupled with my interests in travelling to some rather unusual places, this has put me on an odd route or two.

I wanted to go to the Rupununi savannah in southern Guyana. Doesn’t everybody? It is a pristine land, well off the beaten track, and awkward to reach. Deciding against the obvious, flying to Georgetown and then flying south, I opted to fly first to Caracas, then to Puerto Ordaz (where I sit at this very moment), and tomorrow continuing by road to the Brazilian border (nine bumpy hours), and into Boa Vista, the capital of Brazil’s remote province of Roraima. From there, it is only a few hours up the river to the Guyaneseborder at Lethem.

The first stage was to get to Caracas.

I chose to use COPA, the airline of Panama, who fly from Chicago (among several other north American gateways) to their hub at Panama and thence to Caracas. And what a pleasant surprise the flight was; a brand new Boeing 737-800, with ample legroom in both business and economy, terrific flight crew and good in-flight service. It is amazing how low our expectations of airline service have become, and how little it takes to have us marveling.

Their hub, Tocumen Airport in Panama City, was an eye-opener. COPA operates 105 aircraft to seventy-one destinations in thirty-one countries; who knew. Their hub is a terrific transit point, and their fleet and scheduling allows one-stop connectivity between North, South, Central Americas and the Caribbean.

Our layover, seven hours, a function of reward seat availability rather than choice, was too long. Not really long enough to go into the city, as we were warned that the traffic on the return journey could have us gridlocked for a couple of hours; so we hung around, tired of the shops and eventually headed to Caracas.

We had prepaid a room at the curiously named, but very good Eurobuilding Hotel through our travel agency; however, when we arrived at 0100, we were advised that the payment of $80 had not gone through and that we would have to pay $149. Clearly, this displeased me, and at my most truculent, said “No”; I tried to call the reservation company who handled the booking, but being the middle of the night, I was on hold for an hour. Eventually, the poor girl at the check-in gave us rooms and said we should figure out payment in the morning; this was good, because once one gives in and pays, the money is gone.

In the morning, a delightful manager said that if the prepayment had been made that was good, but she didn’t see any reason to charge us again. So, I shall scour my credit card bills and see what happened. If anything.

But the story doesn’t end there.

She asked where we were going, and once I had outlined the itinerary she seemed to be genuinely worried. Suggestions like keeping money in my shoe, and hiding my iPhone as I wandered through the local bus stations seemed both sensible and unnerving.

Within an hour or so, she called to say that she had arranged for a car and driver from their sister property in Puerto Ordaz to drive us to the border; the nine-hour run would cost us 90,000 Bolivars, a good introduction to the Black Market.

Officially this would have been US$750. Unofficially, buying Bolivars "On the Black", the cost was US$150. An introduction to currency madness unseen (by me) since the Fall of the Wall. Taking her advice to heart, we were met by the driver at the airport, and advised that it was too late to set off tonight, but that we could stay at the Eurobuilding Hotel. We were driven there; far from town the hotel rose like a phoenix from the scrub, and delightful it is; a five-star property, all marble and fountains, and priced accordingly.

Well, remembering the advice about changing money, the 25,000 Bolivar per night room dropped immediately from $150 to $40/night, with a rather pleasant chap who was also checking in providing the exchange. 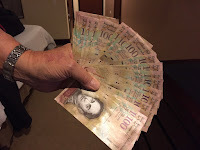 Needless to say, the restaurant and bar prices look attractive. The fact that the largest Venezuelan banknote is for 100 Bolivars is inconvenient, and the wad we have to pay off the driver’s 90,000 tomorrow will be spectacular.

Hopefully, the drive will be as well.
Posted by MaxGlobetrotter at 4:51 PM No comments: Links to this post