Buying a second property is always a difficult decision; home, after all, is home, and duplicating the issues, responsibilities and care required to maintain a house can be both distracting and daunting.
However, as many have asked me both why and how I did it, here are some answers.

I come from Europe, and although I have lived in Canada for forty years and more, I have never “left”, and wanted a foothold here as I grew older and had more time on my hands. France seemed to be a logical place, as I still had a smattering of French grammar pounded into me at my Dickensian boarding school five decades earlier, and in the south, the climate is clement. I had no idea where, but my father, ever a wise man, indicated that I should look at the Languedoc. “It is a fine place”, he said, “very beautiful, good weather, interesting history and they make a nice drop of wine.”

And he was right. Within thirty-six hours of my first visit to Esperaza in 2007, I had bought an old butcher’s shop, on an old street in an old town. No glistening whitewash overlooking a glittering seascape; this was working France, and I fell in love immediately. With the town, but not the bureaucracy.

French bureaucracy is unimaginably tedious and wearying. It is designed for activity rather than purpose or outcome, and cannot be beaten. Documents, in a precise order with a precise number of initials in precisely the correct place, are required by the kilo, and are many and repetitive. Documents sent by registered mail that failed to secure a signature upon receipt (even though the questions within were addressed) cause havoc, and notarised documents noting the lack of signature, although a poor replacement, are needed to complete the package. Taxes are levied, fees are charged, more photographs of elderly relatives and each pet’s birth certificate (unless born in Guadeloupe or Guyane (after January 2003)) are demanded.

But this is France, and secure in the knowledge that the country’s legal system is not actually stacked against an innocuous purchase in an innocuous village, one eventually smiles and lets the system grind along. And, after a couple of months or so, one is summoned to the Notaire, money is paid and the keys are exchanged.

And then the fun starts.

Having a new home reverts one to a quivering teenager purchasing the first bean bags for the first bedsit. How does one get electricity? Water? Heating? Insurance …. The list of endless requirements, completed at home in a blink of an eye, loom like demons of frustration. There is always help, however, and somehow, all of these issues fall into place. Do you buy a bed before a table, a beer fridge before a lamp? Where do you find cutlery and bath grout?

After sourcing the furniture (IKEA is good), life emerges


And then the real fun starts.

The true beauty of having a second home is the opportunity to immerse oneself in another culture in a way that travellers and tourists simply cannot. One returns frequently, each time to discover a new road, a new village, new people, new music and a new thread to the fabric that holds the community together. It is an exciting process and one that draws newcomers into the fold of the village. It is, as is so often said, about “the people”, and this is true. Different communities have different characters, and it is these subtle differences, perhaps, that subconsciously attract different people to different places. 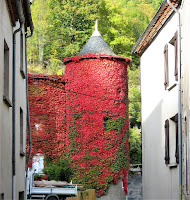 It was Espéraza, the town of 2,500 in the Aude Valley that chose us, and it is fascinating. In its industrial heyday it was the global centre for hat production; it is said that not an actress from Moscow to Los Angeles was without a hat from Espéraza. The industry also served military contracts and the population had swelled to over 20,000 in the 1930s. But alas, a change in fashion, and the invention of other material that armies favoured for their headwear changed the industry, and it has been in decline since the 1950s. It is a town that has been coloured by refugees: over 250,000 fled Spain during Franco’s regime, and many settled in this town on the far side of the Pyrenees.

Today incomers from many other places, from Africa and from Yorkshire, from Amsterdam and even Winnipeg are moving here and adding their own threads to the fabric of the Aude Valley. 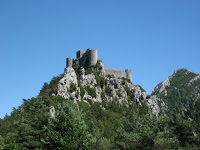 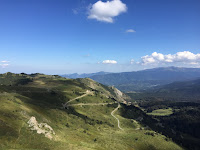 I do believe that if Peter Mayle had written a book called “A Year in the Languedoc” instead of Provence, the social geography of France would be quite different. This is a quiet, contemplative region, and the Aude Valley, a succession of small towns and villages that rise with the land from Carcassonne until one is in the foothills of the Pyrenees, is a gem. It is an indescribably beautiful region, and one that will, I am sure, quietly and steadily grow over the next ten years as more people steer away from the “brands” and seek the soul of the destination that they are visiting.

And, over the ten years that I have had the house here, I have come to love the region so much that two weeks ago I bought a new, and bigger property, and moved. I spend my life travelling, as so many readers have pointed out to me, but of all of the places that I have travelled, for reasons that are impossible to explain, Espéraza and the Aude Valley draw me back.

And it is only three hours from Tossa de Mar! 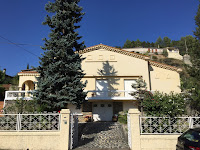 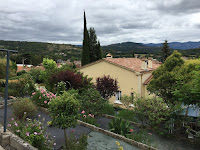 The new house, and the view over the Pyrenees

Posted by MaxGlobetrotter at 6:21 AM