Travelling in West Africa is complex because West Africa is complex. The last leg of my journey wasGuinea to Dakar. This 450-mile leg is as Dallas to Kansas or San Francisco to San Diego, yet we flew over four international boundaries. Had we been on the ground our language would have passed from French to Portuguese to French to English and finally back to French. It is a mosaic of Victorian Europeans’ ideals overlaying centuries of cultural evolution.
a short one-hour hop from Conakry in

So Dakar really came as no surprise.

It is not a city built for tourism. With the exception of Gorée Island, there is really not much to recommend the place. It is hectic, dusty, grasping, chaotic and entirely engrossing; it is a city whose purpose seems to be to part people from their money, and visitors are not exempt from this perpetual game. And, in small and blindingly irritatingly small increments, it is very adept.

It starts at the airport. I always get frustrated at airports’ indifference to their arriving passengers. Surely it would not hurt them to advertise the approximate fares to the town instead of leaving the arriving newbies to fend for themselves? But they
don’t, and the first impression of a country is negotiating a cab fare with no idea of the parameters.

Once in town and wandering around, one never feels alone; a light “Bonjour, how are you?” starts a conversation that inevitably leads to a two hundred metre monologue ending with a plea/demand for money. All day long. 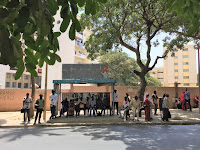 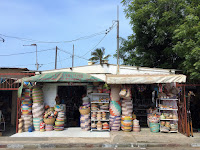 Dakar street scenes - the bus stop and an souvenir shop

However, Dakar is active; each square metre is covered by some activity or other. Folks selling furniture, beads, beating panels and recycling indeterminate objects. Some shops are infernos; some stalls sell charcoal while their neighbours offer an astounding selection of small pieces of mixed hardware. Young boys run between shops, women wander gracefully along the street bearing tall piles of goods on their heads and the cars, yes, the cars …. Everywhere and loud. 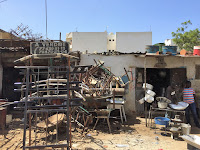 Taxis honk at every walker in the hope of stimulating a fare; gridlocked drivers lean on their horns in the hope of their sound creating a magical pathway through the traffic. Elderly, bright buses belch fumes and the Serious International Charity Managers pass by imperiously in their brand new SUVs. Movement is everywhere; piles of mangoes jostle for attention with barrows of spark plugs. Piles and piles of second hand clothes shipped from north America bearing the logos of Mid-Western high schools or offering soppy aphorisms like “Every Tear is a Waterfall”.

And the dust. And the sand. Although we are hundreds of miles from the Sahara, the sand gets in when it can and where it can. Small drifts lie apparently randomly, but the tell tale signs of encroaching desert are all around. The wind brings the sand and with it a sense that one day this city too could be overwhelmed by the relentless desert.

The shoreline is punctuated by fishing boats and goats. Litter decorates the trees and fences and the odour of inadequately managed life floats in the breeze. And people move; alert and with purpose, other than those who have given up completely or are taking a short rest who move not a muscle. Dakar runs at either 100mph or at a stop.

It is engrossing. Worthwhile. A city like no other I have visited. It feels like a challenge, and one that I think that I have lost, and would continue to do so. To me it is chaos, but to the millions of Dakarois, in its chaos lies uniformity, comprehension and home.

I am glad I have spent some time here, but I am happy to be moving on.

Posted by MaxGlobetrotter at 5:12 PM