I checked into The Hotel Madrid with a little apprehension, although curious as to exactly what €38 per night could possibly buy in Las Palmas, one of the great tourist destinations of Europe, I had booked this property based primarily on reviews and not parsimony. But nevertheless, $45 is not a lot of money to spend on a hotel room.

Well, the answer was actually quite a lot. I was met by an apologetic ex-owner at the door, which also double as the entrance to a fine, period restaurant/bar. He advised that new owners had taken over twelve days before; they were redecorating, and had inadvertently failed to recognise my reservation in a fine front room (an additional €4) and had cut off the hot water.

This may have been an opening volley in some passive/aggressive challenge, but my choice was to stay in the room with a fine view, space but cold water, or shower to my heart’s content in a smaller and, apparently, inferior room. I chose the view.

It is a quite lovely hotel; in conversation, he described it as an “anti-hotel”. “It is for tourists who don’t like hotels”, he explained, “it doesn’t change.” He expressed concern at the new owner’s enthusiasm for change.

As for now, The Hotel Madrid (what a fine, presumptive name that is) hasn’t really evolved; the place is a warm and embracing time warp; it is from the Franco era, as are a couple of the residents who spend their time drinking red wine and watching pretty well anything that happens to be on television. It is not “retro”, it is simply unchanged.

And I love it. 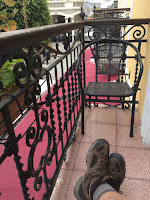 It is Hemingway, Churchill, the 70s and even the 50s all rolled up into a package and left in a time capsule. The marble is sharp, the plants cared for, the bed covers crackly and of dubious provenance and the bathrooms actually functional.


It is curious to be here; sitting in the paneled/tiled bar/restaurant watching the world pass by the Plaza de Cairasco, a fine hipster-renovated restaurant (formerly a bank) only fifty feet away, but sitting here, in an oasis. An anti-hotel.

I love the concept; it could, I suppose, be recreated. It would, of course, become a theme park and lose its charm, dissolution and character. I have no idea who the new owners are, but will meet them tomorrow, I think; they will likely treat me with the scorn that I probably richly deserve. “The past is the past”, they are likely to intone, “and you have no idea what the property taxes are like.” I don’t, of course, but I do tire of hearing these dubious volleys at taxation as the justification for change.

The past cannot be recreated; but every so often one stumbles upon it.; and those moments are to be treasured and, one suspects, left behind. 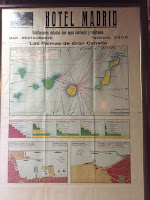 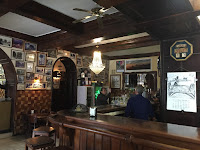 Posted by MaxGlobetrotter at 1:53 PM