I do realise that I have a very fortunate life, and my ability to wander and experience the world is one that I don’t take for granted.

There is, for those who wonder, a downside. My friend Cameron once said that I was “hyper-stimulated”, and thus unable to settle to routines any more, and constantly craving excitement. New colours, unseen mountains, interesting people and simply the need to see what is around the next corner. This is, of course, true, and while not exactly a curse, it does have its negative moments. However, in the quest for new and exciting places and experiences, I have found many wonderful places and people; and restaurants.

I have, in the past three days, been to two of the most wonderful restaurants it has been my privilege to experience. And I say this from many decades of hard trying; I have eaten at fine restaurants on each continent; I have had Michelin meals, eye popping fish and chips, spectacular Icelandic lobster and some of the finest meat that South America can provide. I have also had scorpions, sheep’s eye balls and the pride and joy of some lascivious horse, but those meals fade quickly.

This week’s two prizes are Barbarestan in Tbilisi and Trattoria di via Serra in Bologna.

Now both cities are renowned for food, Bologna possibly more simply due to its location, but for foodies seeking new and exciting tastes, Tbilisi offers some dramatic dining.

Neither are Michelin starred, and neither are expensive; neither are fancy and nor are they conceited. They are both family run, in Bologna by Flavio and Tommaso and in Tbilisi by the massive Kurasbediani family with their ten children. They both offer an exquisite balance between bewitching flavours and a completely unpretentious atmosphere. This self-assurance is the key to their success.
Georgian food is exciting; it is a riot of flavour and colour that both delights and amazes. Barbarestan takes this to a new level by fusing the unexpected together.

Their use of traditional herbs is masterful, and in fact, the entire menu is drawn from a cookbook written in the 19th century by a Georgian duchess (Barbara Jorjadze if you must know) found in the Tbilisi flea market; these are recipes unknown to the contemporary kitchen, and most certainly unfamiliar to the modern palate. Balanced with their substantial offering of Georgian wines, their encyclopaedic knowledge of Georgian customs and music and the polyphonic singing that can accompany some mealtimes, this family has got it right.

And so to Bologna I flew; two years ago I had written that the Trattoria di via Serra was “worth stopping over in Europe simply to eat there”. I wanted to see if this was true. 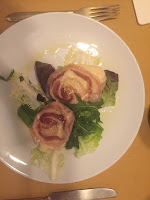 Flavio was, as usual, at the door, letting diners in only after they had rung a bell. One can dine pretty well only by reservation, and the small location is usually full. Its popularity comes, I think, from its attention to detail and the presentation of local, countryside food. Once again, the dishes are not fancy, but drawn from the inspirations of fresh produce artfully combined. Tommaso is a wizard in the kitchen; his skills are evident with every mouthful. His ability to draw the strength of flavour from such simple combinations of ingredients is an inspiration.

Meatballs are not, in fact, a terribly attractive dining options; however, Tommaso's wizardry in combining the apparently basic ingredients is awe inspiring, and takes this simple dish to dizzy heights.

Two such different restaurants in two such different cities. Their similarities, however, are at the root of their success and attraction. Both run by families, one small and one large, but the intimacy offered by the close collaboration of the owners is evident in their food. The cuisine is simple, artful, thoughtful and utterly delicious.

This is fine dining, and not “Fine Dining”.
Posted by MaxGlobetrotter at 2:56 AM