There are wineries, and there is the Bodega Sommos, located in north-central Spain, just south of the Pyrenees in rural Aragon. For those (like me) whose knowledge of Spain is limited to the most iconic locations, exploring Aragon has come as a complete and wonderful surprise.

It is a vast and geographically diverse region, and of historical significance to the British because of Catherine and her relationship with King Henry VIII; and that the pomegranate happened to be her symbol. Although betrothed to Prince Arthur (Henry’s brother) at the tender age of three, and married when she reached a more respectable eighteen, her Spanish life was spent with her parents (Queen Isabella and King Ferdinand (or Aragon)) wandering around the country fighting other kingdoms; not her, obviously, but she would have wandered along with the family. And so she probably had little appreciation of the beauty and diversity of her homeland, Aragon, which is a pity. Because it is a wonderful region of a wonderful country, and the Bodega Sommos is a crowning jewel.

I visited by chance; colleagues from Tbilisi had gone to the winery during a wine tourism conference in Barcelona, and had encouraged me to visit; I was planning a little wander thorough the Pyrenees with my brother, Rik anyhow, and so after contacting Blanca Galino Sanz, the most effervescent and knowledgeable winery representative it has ever been my pleasure to meet, a date and time were set (noon, on May 4th, as it happened), and off we drove through the mountains to keep the engagement.

And my goodness, am I glad that we did. Simply approaching the property is overwhelming. Spanish roads are wonderful, and one turns left by turning right; well, instead of blocking the highway, one is led off to the right and turned to cross the highway from a right angle, and it was at this moment that the full significance of the Bodega Sommos came into view.

When one is visiting a “natural winery”, there is an image of artisans, pretty frocks billowing in the gentle breezes, a slightly ramshackle but homely winery and a convivial tasting. Well, let me tell you that there is nothing ramshackle about Sommos; it is a fabulous building, designed in 2008 just in time to go bankrupt in the Spanish meltdown, but reignited in 2011 and now running on all cylinders.

They grown a lot of grapes. Chardonnay and Pinot Noir as one might expect, but surprisingly, also a Gewurztraminer, one of my favourite grapes, but completely unexpected here. The grape's success was due, we were advised, to the cold and wet winters, and the proximity to the mountains.

Their reds are the traditional Merlots, Sauvignons and Tempranillos, and all grown with a meticulous eye for detail about every single thing that one could imagine affecting the crops. For this is a “natural winery”, organic, if you like, and uses no pesticides or chemicals in the production of their wines.

In lieu of pesticides, pheromones are used to so erotically exhaust the pest-bugs, they fall motionless to the ground instead of spreading disease. Wild flowers are grown (or at least they allow wild flowers to flourish), and this melange seem to keep the meticulous vines healthy, happy and ready to please. Which is good, given that the bodega cost somewhere in the region of €120 million to create.

They harvest gently; large drums of grapes arrive at the winery and are gently jiggled through filters that reject those of the wrong colour, shape or size and allow only the perfect fruit to drop  into the vast fermentation tanks; the tanks, of either 16,000 or 32,000 litres do their thing before they are further mixed.
Not by any crude whisk, but by removing the bottom third of the grapes and dropping them back on top to crush the luckier ones that had been lying at the top of the heap; mixed by gravity, the primary source of force in the bodega.This tactic, using only the pull-of-the-earth certainly seems to work, although gazing down to the depths of the 50 metre tanks one marvels at the sheer quantity of fruit that gets processed; actually, it comes to about 6,000,000 litres of wine each year, the sale of which goes some way to making a dent into the €120 million investment, and the twenty-five year-round staff who keep this wonderful machine ticking over in harmony with the order of things (as St. Augustine would have probably said). 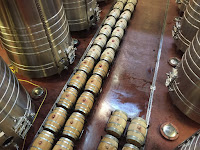 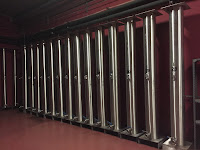 Some oak storage barrels and "Area 51"

It is a fine winery; ranked as the “2nd Wonder of the Wine World” by The Drinks Business magazine, a journal of the serious tippler, and as a visitor, overwhelming on many levels. It is architecturally stunning; sympathetic to its environment and although quite dramatically built, it retains the warmth of a more traditional Spanish Bodega. Perhaps it was Blanca, whose care and guidance enthralled us, and whose generosity in the dining room overwhelmed us, but perhaps it is that secret ingredient that all wineries seek.

For making wine is more than science; it is an art. It is always part magic and part sorcery. Fine grapes, perfect science, first-class facilities and ideal weather do their part, but it is the addition of that supernatural supplement that makes a truly great wine.

And the supernatural is at Bodega Sommos in abundance.
Posted by MaxGlobetrotter at 3:02 PM No comments: Links to this post

Muscat and Oman; a most surprising destination 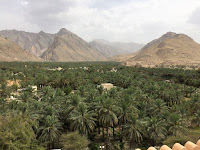 Travelling to Oman seemed so exciting and demanding; careful planning for visas, car insurance, hotels and every other facet of travel was indicated. However, as it turned out, visiting The Sultanate of Oman is a true joy, simple and an experience like no other.
I drove 1,200 kilometres through the country, and wished that I had given it more time to explore.

From the welcoming message as I crossed the UAE border to the universal greetings I received from everybody I met, I was completely mesmerized, and astonished to find out just how little I knew about this surprising country.

Oman is old; very old indeed, and once a great geographical power throughout the Indian Ocean and beyond. Indeed, its last major dependency was the island of Zanzibar which only joined Tanganyika to create Tanzania in the mid 1970s. It was a formidable country.

Yet in 1970, there were only two paved miles of roads in Oman, four schools and consequently little or no development. But there was oil, and in the personage of His Majesty Sultan Qaboos bin Saed, a mind focused completely on developing his country. He spent the decade of the 1970s travelling through the land talking and listening to his people, and in about 1980 embarked on a thirty-five year (so far) development scheme the like of which it is impossible to imagine.

He is a remarkable man; his father ensured that he studied, and in order to properly develop the skills necessary for the task of nation building he saw in it a military parallel, and sent him to Sandhurst for several years. While the transition from father to son was not entirely peaceful, clearly the lessons were well learned, and today his achievements are visible everywhere and his work reaches into every corner of the country.

Unlike the neighbouring Emirates, Oman’s way is to do things unobtrusively. They join no wars, they fight no battles; they are the region’s peacemakers and political deal-makers, and one imagines that its corps of diplomats are kept very busy indeed. Quietly and with dignity is the Omani way.

And unlike its neighbours, Oman was not turned into a Theme Park.

Adhering to strict regulations about the style of architecture, the country grew. Massive six-lane highways link the major centres, tremendous ports were built, cities designed and created and infrastructure laid to every corner of the nation. But first, before any of the major construction work, schools and hospitals were spread throughout Oman, because without the basic ingredients of education and health, it would be impossible to develop the nation.

And so today, as this Herculean achievement has been quietly evolving, Oman has become a wonder for visitors. Its cities, while new, are fascinating; the old port towns still retain a strong air of historical continuation, and their souks are fascinating places to explore, haggle and buy. The community of Muttrah, adjacent to Muscat, is delightful, and a fine place to get a feeling of this unique part of the world. 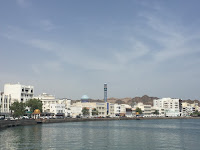 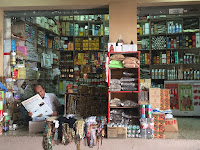 The Muttrah Corniche, and its Souk

Muscat itself is a long, long city; stretching about 40 miles from Muscat, the small, old capital to the Seeb International Airport, is evolves from old to new, from craggy hills to flat shoreline. There are fine museums, opera houses, beaches, parks and shops; there are numerous restaurants and magnificent public buildings. No expense has been spared, and a remarkable restraint on eccentricity has been observed. 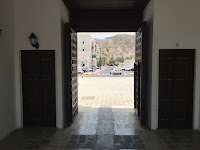 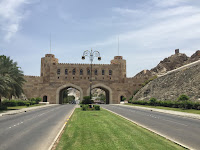 To leave the city and head in to the hills is to be transported to another era; small villages with their characteristic houses, unorthodox collections of shops and imposing mosques are most curious. The weather, sadly, was not the best, and a dust haze obscured the mountains from any distance, but seeing the Al Hajar range from a distance was impressive. As we approached, and headed to Nakhal Fort, the sheer power of the region was quite obvious. 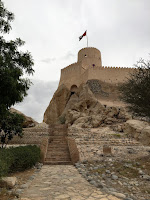 The fort, built some time between 600 and 700 AD is impressive; there is little visible of the original site, but through lavish application of appropriately coloured plaster, a very reasonable facsimile of the original is there for one to view. I am actually pleased that they have gone for a complete makeover, and the site is most impressive.

It sits, predictably on a Wadi (or river), and close to the site are the springs that feed this vital watershed; they are unusually hot, and pour endlessly from a small opening in the rock, and presumably have been doing this for millennia. There are many forts, many castles, many wadis and oases to visit, and I am already looking forward to returning to Oman to explore much more of this hidden gem. 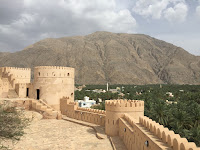 My guide for the afternoon excursion was Suleiman, a young man with three children, the youngest of whom was three weeks old. I mention this only because as I heard this as we drove hastily through the singular Omani traffic, I hoped that he wouldn’t fall asleep. His knowledge of Omani history was encyclopaedic, and while I can remember little detail from what he told me, I recall enough to make me want to learn more before my inevitable return.

Taking a day tour made the country come alive, and it was the perfect balance to the independence of a self-drive car. Driving in the region is not difficult; road signs, as is the way of the world, are erected by those who live in the area and know where every place is, and this generated the odd frisson as one’s exit whizzes by. However, in general, a car hire in combination with one or two guided tours is a fine way to explore and learn about this remarkable country.

Oman is a little reticent, a quality that has kept this nation strong, and that has allowed it to develop away from the world’s gaze. It has allowed Oman to become a real treasure, and a destination that will only become more popular as time goes by.
Posted by MaxGlobetrotter at 7:26 AM No comments: Links to this post