Peter is an Amerindian, and lives in St. Ignatius, a settlement of 2,000 folks living adjacent to the Guyanese community of Lethem. The village, home to both the Makushi and the Wapishana people was officially settled in 1909 by a Jesuit priest, but as is the way of indigenous history, their culture and settlement predated this cartographic moment by thousands of years. Of course the village was not called St. Ignatius before the Jesuits arrived, but had been called Zewari by the local people for ever.

Traditional groups of people have called these lands home for millennia; recent archaeological work tentatively dates settlements in the Amazon as far back as 5,000 years, a formidable timeline. The contemporary Amerindians, as one might imagine, do not really accept the national border system that keeps the rest of us in administrative check, and are free to travel and settle throughout the region.

Peter had spent some time in Brazil, as so many others of this region have done, and upon his return, decided to build a tourism program. He took a tourism management program in Georgetown, and returned to the Rupununi to reclaim land formerly owned by his grandparents, but then left to lie in distress.

By sheer dint of hard work over four years, he built his fledgling attraction at Kumu Falls. Rebuilding a three-mile road through the bush, carrying one or two bags of gravel using only a chainsaw, and using this same at a time by motorcycle; felling trees to make planks and hauling this raw lumber from the forest one at a time to build the structures at the heart of the project, and clearing garbage bag after bag after bag is a very good indicator of the man that Peter Joseph is.

And today, he has the start of a fine tourist attraction. His property lies twenty miles from Lethem; driving there one passes through the gorgeous Savannah country and the village of Kunu before reaching the foot of the Kanuku Mountains where, centred around a waterfall, Peter’s resort is taking shape. Now it is a place to spend a day relaxing, hiking the river trails, swimming under the pristine waterfall and enjoying lunch. Some camp overnight, but for now it is more of a day-trip destination.

His plans are endless; next are some overnight cabins to be built at a height of about seven metres in the trees’ canopy; perhaps a conference room, a new bus to ferry clients to/from the resort is on order, and will be ready in a week or so. 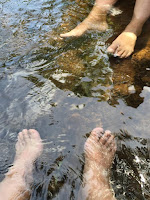 The core of Kunu Falls

I have worked for years with tourism programs in small communities, and feel that the importance of tourism as a part of the economic and cultural mosaic that is each separate economy is vital. I believe that working with a group’s history, and by rediscovering traditional beliefs, music, art, history and connecting with the community’s past allows a clearer vision of the future. Tourism is but a by-product of this connection, and important one to be sure, but most importantly, it is an opportunity for the past to be integrated into the economic and social evolution of the village. Peter’s project of one of the best that I have ever seen.

I loved the day there; the immersion into the Amerindian culture in this pristine setting was a tonic. Meeting Peter and hearing his stories, both personal and cultural were fascinating, and the drive that this sort of development gives to the culture and economy of the indigenous culture of the region is immeasurable.

Thanks, Peter, for a most interesting and thought-provoking day. You have a fine facility.
Posted by MaxGlobetrotter at 7:05 AM