Hertz: Too Big to Care

In October last year, I rented a car from Hertz in Toulouse for a couple of weeks. I have done this several times over the past seven years, and it has always been smooth.

When the vehicle was returned to the airport, completely unscathed, full of diesel and with only a further 900 or so kms on its clock, all seemed well. The return was registered at 5.02pm, and the automatic invoice generated at 5.04pm.

The invoice, however, contained a charge for €221 for “24/24 Assistance”; this is odd, as my profile (and I am a Gold Five-Star Member”) clearly indicates that I wish for no insurance or supplementary protections at all; none, whatsoever, and to date, these instructions have been followed.

Now, however, the game was on.

First, I assumed that a quick phone call to the Gold Line would suffice; silly me. After being transferred four times, with each concomitant wait, I was advised that it was a “French Matter”, and that my query would be forwarded to them. This was followed by a blizzard of helpful emails, many of which sought my impression of their service to be offered through the completion of an “on-line survey”.

I disputed the amount through American Express, and they took the offending payment off my bill. And we waited.

I was then advised by Amex that Hertz had advised that the charge was for “cleaning”, and apparently I had put the wrong sort of fuel in the car, and they were replacing the charge and would I now cough up.

Well, the problems with this scenario are three-fold:
Not even close.

I submitted another hold on the Amex account and set off to round two. This has culminated in a letter from the Hertz collections folks in the UK (“How did the UK get into it”, I hear you ask) who are actually, it turns out, in the Republic of Ireland.

This missive tells me in no uncertain terms that:


Well, faced with this wall, I again phoned. Not that the phone number they gave me was any good; they advised me to call a number in the UK using the international prefix “00”; this is, in fact, the prefix used by people in the UK (and presumably the Irish Republic) to call out. North Americans calling to the UK use a prefix “011”; a minor point, but if one writes snotty and heavy handed letters demanding “immediate attention”, the least they would do is get their own phone number right.

And so to chatting with the lovely Rachel. I don’t know about you, but those poor folks who work for collection agencies, airline lost-luggage departments or those whose job it is to rebook passengers stranded in the eye of a storm always seem to be medicated.

We have a conversation; I reiterate the issues and my most reasonable position; she sympathizes and says that I must have put the wrong sort of fuel in the car; I explain the different size nozzles that are attached to fuel pumps to prevent this sort of accident; she sympathizes and once again suggests that the wrong type of fuel has been used. I supply the image of the receipt for the correct type of fuel and she thinks that they may have to refer this matter to France.

I hang up, in a growly but jovial mood, and am immediately faced with cheery new emails from Hertz thanking me for contacting their customer service people and asking how I “felt about the experience”.

Hertz; please, just sort this out. I have been a loyal customer for years, but honestly, there is really little difference between your vehicles and those belonging to AVIS or Sixt.

Companies like Hertz have become too big. They are, as we all know, also Dollar and Thrifty, and big enough to feature such powerful role models as O. J. Simpson as their barkers. They have, however, lost touch with indivuduals during this growth. And they are not alone.

There are now only 3.5 airlines in the US (American (1,494 aircraft), Delta (1,280), United (1,264) and Southwest (683)), and as they have grown, so has their tolerance for irritated passengers. If one assumes that 1/2% of each airlines’ passengers are grumpy and “never want to travel with them again”, it is a large number, but these gruntleless passengers have only two alternatives. And each carrier will receive as many passengers who have lost their gruntle with a competitor as they lose.

So why bother to calm the waters? Much more economical to let them squeal and run to the competitors; a sound business decision, and an attitude that we see more and more often in the surviving corporate behemoths that dominate the serevice sector.

The triumph of capitalism in the service industry seems to be the attainment of the pinnacle from which one can simply be Too Big to Care. 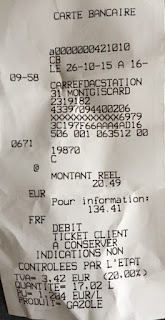 Posted by MaxGlobetrotter at 10:23 AM