Quite why tourist would want to visit the North Pole is open to debate, but each year a few hundred hardy souls reach this point of some geographically importance, but little social value. They arrive by foot, well actually on skis, by dog team, on ice-breaking ships, by helicopter and aircraft and even drop out of the sky under parachutes. 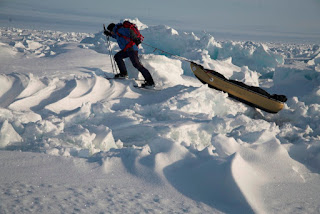 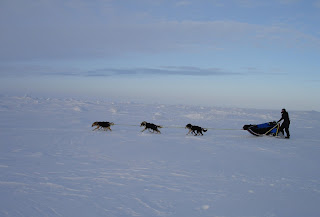 The lure of landmark destinations is strong, witness the curious crocodile-lines of climbers conquering Mt Everest, and the North Pole is a marquee destination; a very significant tick on one’s bucket list.

The choices, however, are diminishing fast. One of the Canadian airlines that used to offer  complex and difficult flights to the Pole have announced that they will no longer fly tourists, blaming warming weather and increasingly slushy landing surfaces. This claim seems to be repudiated by the Russians who offer a spectacular operation from Camp Borneo, supporting a significant number of polar assaults.

The Russian ice-breakers that have carried tourists on two or three sailings each year are now being brought back to serve in their original capacity of breaking ice, and within two seasons, there is like to be only one option for the intrepid, and well-heeled who what to drop into 90°N.

Reaching the pole seems to be a goal for the obsessed; while obviously money is a very significant factor, those who reach the top of the world do come from all walks of life. The wealthy rub shoulders with the obsessed at Camp Barneo (so named, it was confusingly explained, to distinguish it somehow from Borneo), as several dedicated skiers launch out on their challenge to reach the pole by their own power.

The journey is amazingly variable; although the camp starts at roughly 89°N and 100°E, it is floating, and during the 24-day season, it can move from 60 miles from the pole to over 150 miles. The skiers and those attacking the route with dog-teams need to know that they don’t know just how far they will have to travel. The general idea is to travel the “last degree”, or sixty miles, under one’s own power, but one simply never knows.

The Pole brings out the truly eccentric in its visitors. Some choose to dive under the ice, some jump out of helicopters and gently float to the ground; the games and activities that visitors dream up and enact certainly cover the spectrum of imagination. 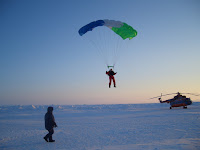 Arrive at the Pole any way that you want!

Why on earth anyone would want to run such an operation is also a very good question, and when I met the director, Victor Boyarshy in St. Petersburg last week, he was equally perplexed. “We have run this camp since 1993”, he said, “and it seems to be interesting”. It is an extraordinary achievement; everything has to be flown in and flown out using the rather extraordinary Ukrainian aircraft, the AN-74 and flexing this versatile machine to its maximum. Starting with the initial survey-helicopters who each year seek out a suitable area for the camp, the initial runway-clearing equipment is brought in and the strip, 1000m x 60m established. 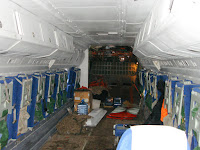 The amazing Antonov 74 - inside and out!

The landing strip is certified by the Russian aviation authorities as suitable for use by commercial passengers, and this certification allows insurance, the first of the many tumblers to fall into position, to be obtained. Then the camp is erected, the generators installed, jet fuel imported, food and bedding brought up and all of this for twenty-four days of frenetic activity, and to accommodate about one hundred hardy adventurers.
The camp opens in early April, before that it is dark and too cold, and by the end of the month, the leads in the ice make any sort of structure unfeasible. It is a very short window, and one that seems to be increasing in interest every year. Travelers need to book well in advance, and with prices starting at around US$20,000 plus flights, it probably requires some pre-planning for most.

The camp is exciting; new connections are being discussed, more visitors are expected and as peculiar as it sounds, the North Pole is starting to make it off many folks bucket lists!

If you are interested in visiting this amazing outpost, feel free to contact me (max@ttjtourism.com) and I will be happy to put you in touch with the right people.

All photographs provided by Company VICAAR / Camp Barneo
Posted by MaxGlobetrotter at 11:39 AM No comments: Links to this post

I have not written much about The Baltics, and it is a sad omission. The Baltic Sea covers a vast area of northern Europe, with the Scandinavian countries forming its northern and western extremities, and Germany and a handful of small and rather fascinating countries its southern shores. 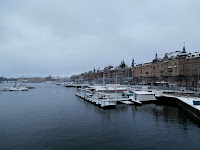 Riga, Latvia and the harbour in Stocholm


For most of the Cold War period, the region was the purview of a variety of elaborate Swedish and Finnish ferries, a few fishing boats and hundreds of miles of formidable borders. All this, of course, has changed completely, and now the nine countries that border the region, plus the peculiar Russian exclave of Kaliningrad, are absolutely worth exploring.

The article is prompted in a way but my being in St. Petersburg as I write, and realizing that I was in Hamburg only three weeks ago. The similarities between the two cities, at least superficially, is more than simply a coincidence.

The region was, back in the fifteenth century dominated by a commercial organization called the Hanseatic League; this vast confederation stretched from eastern Britain to the eastern reaches of the Baltic, and during its peak, controlled commercial traffic and also offered a forceful and reliable legal framework for the citizens of the countries over whom it held influence. Now most of the period’s visible artifacts are long gone, but there is a similarity in architecture, town structure and atmosphere in all of the great cities of this rather interesting period.

While there are few remaining practical features, it should be noted that “Lufthansa”, the German airline as “Air Hansa”, and the ancient “Hansabank” now operates from Sweden as the “Swedbank”. There are, however, fascinating similarities that dominate this coastline. It takes little imagination as one wanders through the tottering back streets of Klaipeda in Lithuania, or the vast systems of docks and canals that comprise the Hamburg waterfront to imagine the power and strength, and indeed the supreme confidence that the Hanseatic League must have inspired.

Contemporary travelers, however, have considerably greater comfort and options for movement. It is most certainly possible to circumnavigate the Sea using a combination of public transportation and rented cars. From Hamburg one can travel along the coast through Poland and then, bypassing Kaliningrad and its visa issues, into the three countries known as The Baltics (Lithuania, Latvia and Estonia).

And these three countries are marvellous. Beautiful, compact, friendly, and (it must be said in the context of Scandinavia) eminently affordable, they offer visitors a fine chance to explore. Renting a car for a few days is the best way to do so, and by plotting a circuit one can enjoy the quirkiness of the region at one’s one pace.

Each country is different; linguistically, geographically and by temperament. As the Cold War ended, the Danish government took Lithuania under its wing, the Swedes “adopted” Latvia and the Finns deepened their ancient ties with the equally linguistically-challenged Estonians. These ties most certainly helped the three former soviet countries’transition into western Europe and the EU, and while they have had some bumps in the road, their position as growing economies and a part of the west is (fairly) secure.

For visitors, they are wonderful. Vilnius’ Old Town is a delight; ancient curly streets, small cafes, delightful arts shops and finely restored buildings, interesting seaside towns and villages in the countryside that time has simply forgotten. Riga’s rather imperial visage is beautifully counterbalanced by a unique display of hundreds of soviet-era aircraft in an eccentrically curated museum adjacent to the city’s airport. Inland towns are vivid, forgotten and really rather nice.

The air museum at Riga Airport

And so to the north, and if one wants to go through the expense and hassle of obtaining a Russian visa, the city is really rather splendid. Its history is rich, its buildings lavish and the waterways that dominate the layout of St. Petersburg are delightful. But then again, there is the visa, and at a cost of approximately $300 + courier fees, and now the requirement to visit a consulate to have one’s finger prints taken, many will simply not bother, and take the ferry from Tallinnto Helsinki instead.

And so to the Finnish capital, and perhaps Europe’s most forgotten destination; “A poor second to Belgium when going abroad” as Monty Python once intoned. It is, notwithstanding, charming; heavy weatherproof buildings dominate an active waterline, and inland, Finland continues for miles and miles of Canadian Shield-type countryside, protected from foreigners by an impenetrable language, strange protocols involving plunging naked into lakes in the winter, and a culinary admiration for the more peculiar, and dare I say it “economical” parts of large fish.

Finally, to Stockholm, the jewel of the Baltics; there are overnight “ferries” that ply between the Finnish and Swedish capitals, and it is really the only way to travel. Vegas-like entertainment, blingy shopping and fine dining punctuate the 18 hour journey, and as you wake the ship will be meandering through the islands that make up the archipelago upon which Stockholm, my favourite European capital, is located.


Eye-wateringly expensive, and equally gorgeous, it is a city to savour. Its grandeur, its location and topography and above all, it people are truly delightful, and offer visitors a glimpse into the richness that a progressive, historical and secure country can reach. There are some wonderfully quirky museums, terrific public spaces, a fine waterfront and endless diversions that can happily see many days pass by.

One can travel easily through the region independently, or, of course, enjoy one of the many cruise lines that are offering a wide range of ports and combinations.

An independent trip, would possibly start in Hamburg, travel to Gdansk and on to Warsaw by train for an onward flight to Tallinn. In Tallinn, one could rent a car and spend some days in a circuit of the three "Baltic States", and once back in Tallinn either continue to St. Petersburg and Helsinki by train, or directly on a farry. The ferry connection to Stockholm is simple, and from there to Copenhagen there are several daily trains. The final leg back to Hamburg could take advantage of the unique train-on-a-ferry option to complete this epic circumnavigation. Allow 16 - 20 days!
Posted by MaxGlobetrotter at 6:21 AM No comments: Links to this post