I have, for the past ten days, been travelling in Europe to a tight schedule. Although nominally “retired”, but we shall explore that term at a later time, I have some interesting projects that require me to present myself at a variety of European locations within a relatively short timeframe.

For this, I have chosen a Eurail Pass. These formerly simply accessories now require the patience of a saint to decipher, there being so many options;  the options, of course, being (one feels) the reaction to so many “emerging” partners like Romania with whom Germany and France do not care to share the revenue on a simple, geographically proportionally basis. Or, frankly, any other; I digress.

I love German trains; clean, efficient and quick, they epitomize travel in 21st and possibly the 22nd century, and have the ability to whizz one around the continent at a dizzying rate. However, it must be said, they don’t always work so well, and with the emotional spark of a lactose-intolerant stevedore, they are known to become sluggish.

Three trains out of three yesterday were late, and I don’t mean by two minutes. They were tardy by an hour or so, and each an independent journey. No need here to muddy the waters with obsolete references to railway-punctuality in bygone eras, but one wonders what happened and just who could get the trains moving on time.

Then, there are, astonishingly, trains in Germany and France that are designed to be slow. I was a touch confused as to the purpose of three lines of immobile traffic at the Hamburg Altona station. Well, it turned out, by acute observation on my part, that they were lines for the overnight car-transporter trains to Lörrach, a town that nobody has ever heard of, but lies across the border with Switzerland from Basel. One loads one’s car, one sleeps (perhaps) and one wakes up eleven hours (and three minutes, but I wouldn’t be too sure about that precision) to the south ready for a triangular chocolate bar. 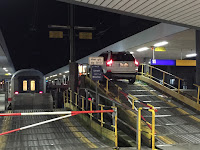 It is brilliant; there are several of these “motorail” options in Europe, and I have often wondered why this option does not readily exist in Canada. To the extent that some years ago I wanted to partner with the fine Winnipeg-based forwarding company TransX to provide exactly this service; ship your car to Halifax and drive it back … a simple and potentially rewarding concept. It went nowhere, but that was my fault, and like most great ideas it lurks somewhere in my imagination.

However, I digress. Germany is a large country. Not really large enough for a domestic train to take eleven hours without some pretty nifty signaling, but big enough that I shall fly to Munich tomorrow rather than enjoy the panoramic view of trees that line the railway track to the south.

I like train travel though; it clears one’s mind, it avoids all manner of bizarre and predatory “security features” that are so redolent of air travel today, and it offers the mind a fertile and evolving playing-field for the imagination to exercise.

And believe me, my mind needs space in which to operate.
Posted by MaxGlobetrotter at 4:01 PM 1 comment: Links to this post

Chicago - My Favourite US City

I think that it is pretty hard not to like Chicago, and I try to visit as often as I can. Frequently, travelling to from Europe, I will route my journey through the Windy City, named for their politicians ability to talk rather then the weather, spend a night or two, from most Canadian cities, it is an easy weekend escape. 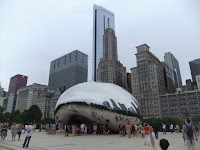 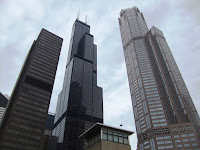 Chicago' s Skyline (and The Bean) are endlessly fascinating!

For about ten years I had an office in Chicago at the corner of Michigan and Wacker, and got to spend a large amount of time in the city. I came quickly to realise that far from a jumble of tall buildings, the city have a pace and a smile that was inherently mid-western. It is a city that is comfortable in ints own shoes, and offers visitors a pretty clear vision of how it feels. There is none of teh challenge that has always characterised New York, or the quizically laid-back atmosphere of the west coast ... in Chicago, you get what you see.

Which is a heck of a lot! The city is the beneficiary of some most inspired urban planning; after Great Fire of 1871, the city was rebuilt, and rebuilt with vision. Its location, along the shoreline of Lake Michigan is delightful, and the insistance of the planners to leave a vast area of land adjacent to the water as public space, inspired. One cannot imagine the pressure that the local barons applied to allow them to rebuild their mansions on the coast, but this was not to be, and today's city offers some of the finest urban planning legacies in North America today.


The city's buildings are alive; the justaposition of ages first jar the senses and then delight; one can hardly wander through the central core without gasping at some of the design inspirations, and truly, this is a city whose simple physical presence is to be inhaled. It is buzzy, with street performers, the usual urban collection of hopefuls trying to prise a dollaw or two out of you, and endless people wandering and scurrying through the city's streets, shops and parks.

It is a delight to get around; the public transportation systemn is efficient and straightforward, and cabs are plentiful and reasonably priced. And, of course, one can always rent bikes or walk.

Frankly, I am not altogether sure why so few (relatively) Canadians visit. From Winnipeg, New York is the US city of choice, even though it takes at least six hours each way to fly via one connecting city or other. Chicago is two hours away on a non-stop flight and offers everything that one may want. Its architecture is legendary, the blues music iconic, and the restaurants superb. The museums and galleries are of the first order, and the whole ambience of the city is buzzy and exciting. There are accommodations to suit everyone, shopping to sate the most jaded palate and frankly, I don’t know why I don’t just move here.

I love the city; from the simple, if a touch bouncy and raw, metro ride from O’Hare (or Midway) airport to the city centre to the first class public transportation system, it is easy to get around. There is the added glee of passing the swells riding in their airport limousines stuck in the freeway (there’s a misnomer) traffic, as you whizz into the city. It is really accessible for accommodation in the Loop (I love the Palmer House), is easy, and if you are on the Magnificent Mile, a short cab ride from the Clarke and Lake will get you to the property in under an hour.

Then the decisions are tough; where to eat, what to do and where to spend your time. Whatever you choose, if you are a fan of the blues, and don’t have to get up too early, be sure head to Kingston Mines (after about 10pm) for the best in town; another place worth mentioning, although there are really too many from which to choose, is the fabulous Rosa's Lounge. Rosa's might be a little out of theway, but it is well worth the effort; close to it is La Bomba, a great Puerto Rican restaurant, and the two make a perfect combination.


Walk in Lincoln Park, visit the Field Museum and the Art Institute and above all, wander. While the Loop and Mag Mile are entertaining and absorbing, it is also worth jumping on the bus or CTA and heading to one of the near suburbs like Adison where you will find some great restaurants and shops.

And then, of course, there are the fabulous buildings of Frank Lloyd Wright. Only a thirty minute ride on the CTA to the west of the city lies Oak Park, home of many homes designed by this iconic architect; some are open to the public, some can only be gazed at from outside, but a trip to the area is well worth the ride.

And if you get thirsty, you can just Stop and Drink. 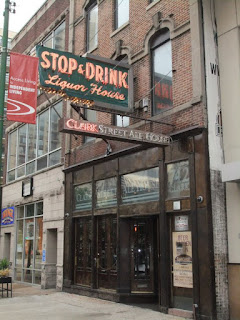 I am already looking forward to coming back in December!
Posted by MaxGlobetrotter at 7:45 AM No comments: Links to this post