I have always had a soft spot for Yellowknife, and can unequivocally say that it is my favourite of the fourteen provincial, territorial and federal capitals. For what it is worth, Edmonton is my least favourite, but nobody asked, and I don’t want to dwell on the Bad Times.

Yellowknife, quite simply, is fun; it takes itself so seriously that it borders on becoming a parody of itself, and in that enthusiasm embraces visitors and observers into the unique perspective of life that is offered by diamonds, government and tourism.

I first travelled there in the early 1980s. At that time Northwest Territorial Airways operated an elderly Lockheed Electra, a most comfortable 86-passenger propeller plane that offered a semi-circular lounge area in its tail, on a three-hour flight from Winnipeg to Yellowknife. I was fortunate to ride on this line several times, and came to love the frontier town that the Territorial capital then was.

The price of gold was marked hourly by chalk in the smoky coffee shop of the Discovery Inn, this information seemingly critical to the minute-by-minute temperament of the locals. Tourism, of course, was barely on the horizon in those days, but there were great folks around who wanted to see how they could join this burgeoning industry.

And they most certainly succeeded! Yellowknife now hosts as many as 75,000 visitors each year, a number that exceeds its population. Many (some 22,000) come for the Northern Lights, as Yellowknife is one of, if not the preeminent locations to witness this extraordinary display. In particular, the Japanese visit in huge numbers, 10,000 at the last count, and this has spawned a fascinating parallel economy of fine sushi and other Japanese niceties to sooth these visitors’ yearnings for home. 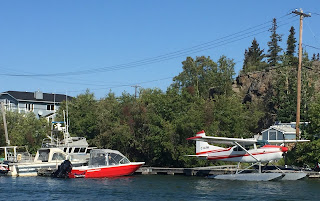 But is it not all about lights, of course, given that the city bathes in sunlight for several months each year. It is, above all, I decided, all about aviation.  The city is alive with aircraft from the conventional jets that connect the city with the south to a vast miscellany of buzzy little creatures that whizz miners, tourists, campers and sightseers around the astonishing surroundings. Lakes and trees, Canada’s staple landscape, dominate; however, the connectivity by air, the isolated cabins, the dramatic lodges and fertile hunting grounds bring the bush to the city and the city to the bush. It is hard to tell where one ends and the other begins.

The Old Town is the cultural heartbeat of Yellowknife; the original houses, some restored professionally, some with only love and a smile and some untouched for decades, reflect the powerful sense of triumph and the future that the original prospectors imbued. It is a place to get lost, and there is a superb audio-app that every visitor should obtain that quickly draws you back to the thirties and forties, and the real core of Yellowknife’s soul. 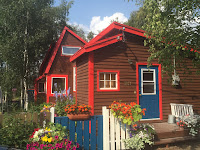 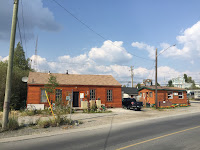 
From the city, when one just has to get away, there are lodges and camps, but none finer then Blachford Lake, a long-term work-in-progress facility about forty minutes away by air. This lodge defies description; it is comfortable and has managed to incorporate the souls of every visitor and staff member rover the thirty-five years it has been in operation. It offers accommodation and food, of course, but more importantly a milieu that can best be described as its own ecosystem.

I love Blachford. The facilities are by no means luxurious, but extend the security of a family with the celebration of friends in the most unlikely setting. There are educational courses and weddings, small think-tank meetings and romantic weekends, fishing escapes and aurora watching and dog sledding and ambience; above all, the northern ambience. Visitors come for many reasons, but all leave with the same images woven together to form their own memories.

And if one has to point out that if it is good enough for the Duke and Duchess of Cambridge, given their choice of evey lodge in Canada, well, I would agree that is is more than good enough for me.

We were there for dinner, and as our six-seat Beaver waited patiently, we certainly didnt' want to leave too fast. The atmosphere of the Lodge is unique; anover used word, perhaps, but this truly was. It is not a "Wilderness Lodge", and does not fit neatly into any single classification, but this, of course, is the core of Blachford's attractions. It is simply a Lodge in the Wilderness offering its guests an extraordinary opportunty to feel free, comfortable and to completely relax, secure in teh knowledge that the remarkable staff are ready to explain, show, identify and talk about anything and everything that happens and lives in these vast woods. 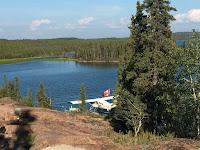 Back in the city, and seeking food, we were surprised at the varation that is available; certainly a result of both local demand and the thousands of hungry tourists that come by each year. Terrific restaurants abound, and Bullock’s Bistro, the Dancing Moose and Sushi North deserve a special mention; there are brilliant museums and exhibitions; the town’s hiking trails, particularly Frame Lake are fabulous, and in the winter, and I am sure that I will get back again to report, a whole new world of opportunity opens up.

Yellowknife is an active place, and for those willing to get out and enjoy, the rewards are endless. 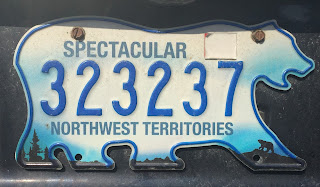 Posted by MaxGlobetrotter at 11:56 AM No comments: Links to this post

The Canadian Prairies; Driving the Yellowhead Highway to Yellowknife

How remiss and idle I have been.

I have, in accordance with the Way of Life, been wandering this summer, and notably through Canada. Having left Newfoundland and its unusual dancing, whizzed around the Cabot Trail, and I must say left that iconic drive completely underwhelmed, it was time to head west, and drive to Yellowknife in the Northwest Territories

Now the drive from Winnipeg to Yellowknife, some 3,000 kms of deeply predictably highway, can appear to be monotonous. This would be and unfortunate and slightly unkind observation as my friend, the CBC notable Laurie Hoogstraten pointed out. “Meditative is the word you are looking for, Max”, she intoned, “not dull at all”.

She may have a point. The landscapes between here and there is not Alpine; it does, however offer some broad and extraordinary landscapes coloured by the changing sky, the crops and the periodic, brightly coloured farm building. Yellows, Blues, reds and the heavy and dominating black skies of a Prairie storm were all about, and with the wide open plains, visible in a 360° arc that completely encased our car.

The Yellowhead Highway is the main artery to the northwest, and it was on this wonderfully named road that we spent some 1,500 kms passing through the rolling fields of western Manitoba, the agricultural heartland of Saskatchewan (“easy to draw, hard to spell”), and the transitioning landscapes of Alberta.

Farm implements for sale in such numbers; massive, insect-like machines with purposes city-dwellers could only presume lined the side of the highways as we passed through the Prairie farming towns. Endless fields of brightly coloured canola, herds of sunflowers and the rising tide of wheat that would eventually be taken in the early fall. All of this agriculture was quite overwhelming, and visually delightful.

While at first glance, the road was long, straight and scarcely undulating, it was impossible not to feel the overwhelming sense of community that imbues life on the sharp end of production. It is, after all, these men and women living their lives in a thousand  Dog Rivers that feed us all. Trains, three kilometres long, as they passed by one at a level crossing, gave ample time to ponder their cargoes, destinations and the extraordinary process by which seed, water and sun can create billions of tons of produce to be shipped to every corner of the earth.

They were long trains.

And once free, and ready to move on, we reached Saskatoon, the slightly quirky and rather pretty city that houses the University of Saskatchewan and straddles the South Saskatchewan River in the centre of the prairie. It is a welcome break, although it was raining so much its charms were mostly washed away, but there are several very good restaurants in town, and the opportunity was taken to celebrate my cousin Jude’s Marker Birthday in some style.

She, my cousin, was it must be said, quite overwhelmed with the available space of the prairie, the relative emptiness of the roads, the sheer quantity of farmland, the mysterious stick-insect-machines that seemed to be so popular, the proliferation of pick-up trucks, the rather unappealing urban-planning represented to us as we drove, grain elevators, and Corner Gas (to which we inevitably introduced her). 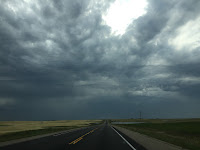 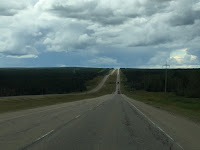 And so the first day passed; the second (1,074kms to Peace River) was not notably different other than the irritating road works, punctuating the meditation, presented by Edmonton clearly trying to sharpen itself up. We turned north; the first real junction of the journey and a good opportunity to test the car’s steering mechanism, and slowly but surely, in the sort of progression that is only visible to those in a car, or perhaps a train, the landscape changed, and on the third day, (945kms - Peace River to Fort Providence) we passed the border into the Northwest Territories, and as we burst across the 60th parallel, so did the sunshine and our introduction to the north was complete as the park rangers immediately offered us a cup of coffee.

Coffee is the fuel of the north; barely an hour goes by without someone “putting on another pot”, “topping one up”, “reaching for an empty cup” and bemoaning the black liquid’s viscosity. “A bit thick, this coffee” is a common refrain, but there it is, the primary food group of Canada’s territories.

Fort Providence, a community that lies along the Mighty Mackenzie, and until recently was where all land traffic in the summer had to cross by ferry, is compact, slightly buggy, friendly and a fine place to stay overnight before the final 350kms on to Yellowknife.

I am, as many well know, an immigrant from the United Kingdom; London is my Home Town and the transition from Britain to Canada interesting. There are, it seems two English people living in Fort Prov (as it is so charmingly diminutised); appearing in the community one day, and declaring that it offered all that was unavailable in Great Britain, they moved. I didn’t meet them, but would love to find out more. Perhaps it was the curious drinking requirements: 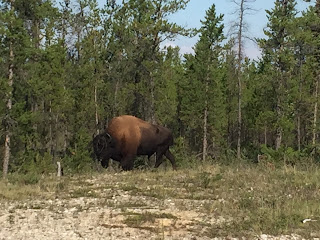 Having been split into two parts in 1999, the eastern Arctic became the Nunavut Territory, and presumably tired of the etymological disturbances of the past centuries, and being underwhelmed by the new names offered as an alternative (“Denedeh”, an Athabaskan word meaning “Our Land” was a strong contender, as was the choice to rename the territory “Bob” according to polls at the time), the title of The Northwest Territories stuck, and the NWT it remains.

A very fine place, and only 3,020 kms from my house in Winnipeg.
Posted by MaxGlobetrotter at 2:40 PM 13 comments: Links to this post