Georgia in the Caucasus: Travelling with Journalists

As you probably know, Georgia, at the eastern end of the Black Sea, is one of my favourite countries in the world. Tbilisi, its capital enchants, Svaneti and Tusheti are two mountainous regions beyond description and the wine-growing region of Kakheti and its gorgeous community of Sighnaghi are utterly wonderful.

However, one sometimes gets to believe one’s own rhetoric, and faced with the critical eyes of an audience unseduced by its charms sometimes one’s loves shatter and fade.

And such was the worry when I agreed to arrange a group tour of Georgia for a dozen North American journalists last month.

We met at Tbilisi airport in the wee hours of the morning; most flights to/from Europe whizz in and out between 3.00 and 5.00am, and although the Georgians are quite used to this eccentricity, it comes as a bit of a shock to newcomers. However, whisked off to our hotel, and allowed a restorative six hours sleep, we were duly shaken from our reveries and taken for our morning (well, noon by now) wine-tasting. 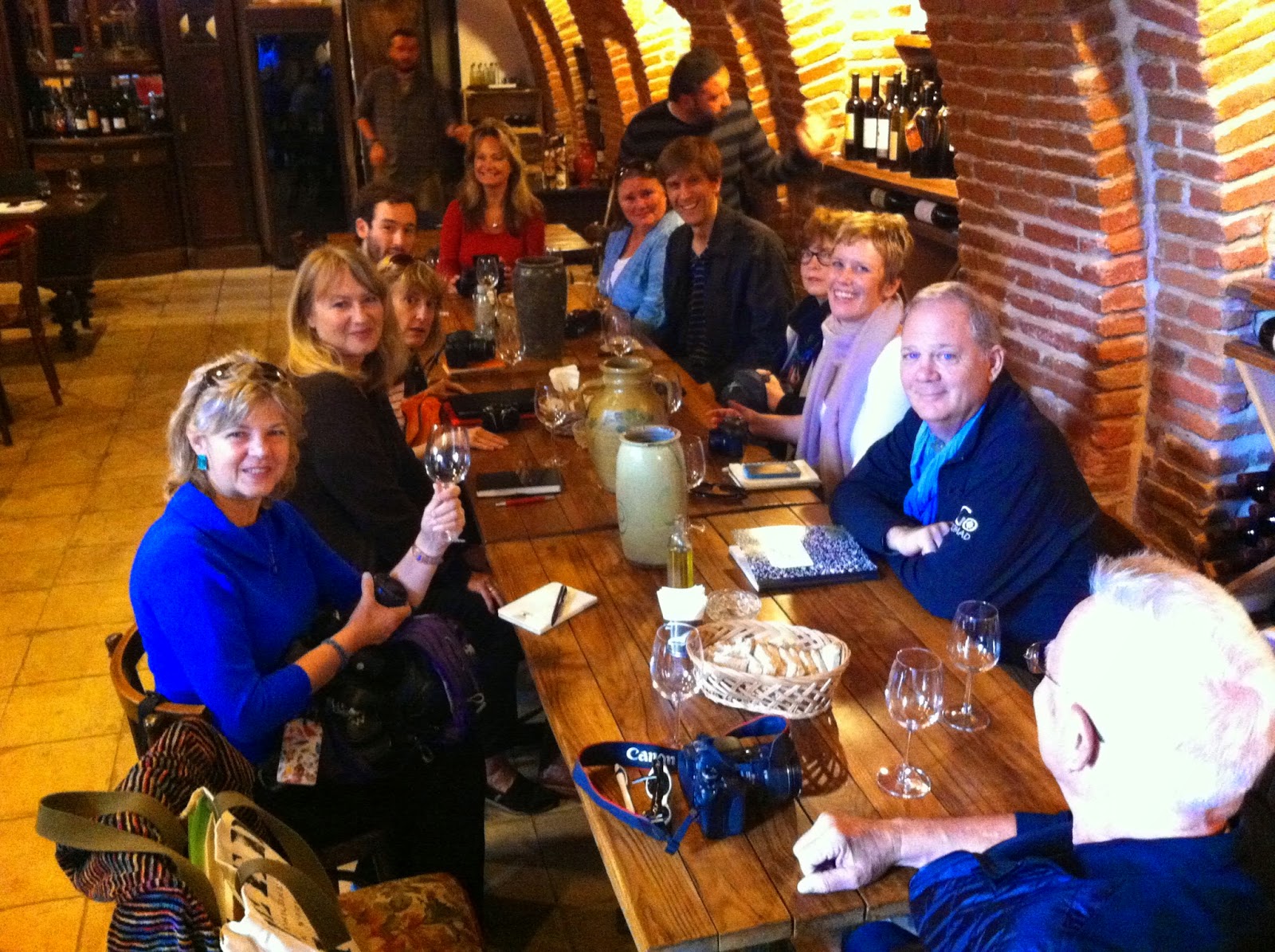 Wine is to Georgians so much more than an alcoholic drink. It is one of the very strands that combine with religion, language and history to create the fabric of this most interesting and hospitable country. The vine is a symbol of the nation; when Christianity was originally brought to Georgia in the fourth century by the remarkable woman, St. Nino, her cross was made from twisted vines. She must have been a remarkable personality, for the Queen of the time, Queen Nana requested a meeting, and converted to this new religion, and Georgians have never wavered in their belief.

The next days were a most extraordinary journey; we visited ranches, cities, monasteries, convents, a 12th centurywine-making academy, a museum to Stalin, the ancient capital of Mtskheta, the mountains of Svaneti, the UNESCO heritage village of Ushguli in the high Caucasus mountains, a partly-restored Soviet Military Spa (where we slept for a night, and delighted in the ephemera of the bar/disco), souvenir shops, two national museums and a bath house. We rode with the best guide in the region, Tamara Natenadze on a tour organised with my colleagues from the best travel company in the region, Living Roots.


And we had fun. We had surprises, and above all, we had a dozen journalists who were quite astonished that Georgia had been able to remain under the radar for so long. I reminded that that they were, in fact, the radar, and that was why they were here. And so, after a few toasts, and promises of endless friendships and everlasting joy, they left to ponder a most remarkable week. 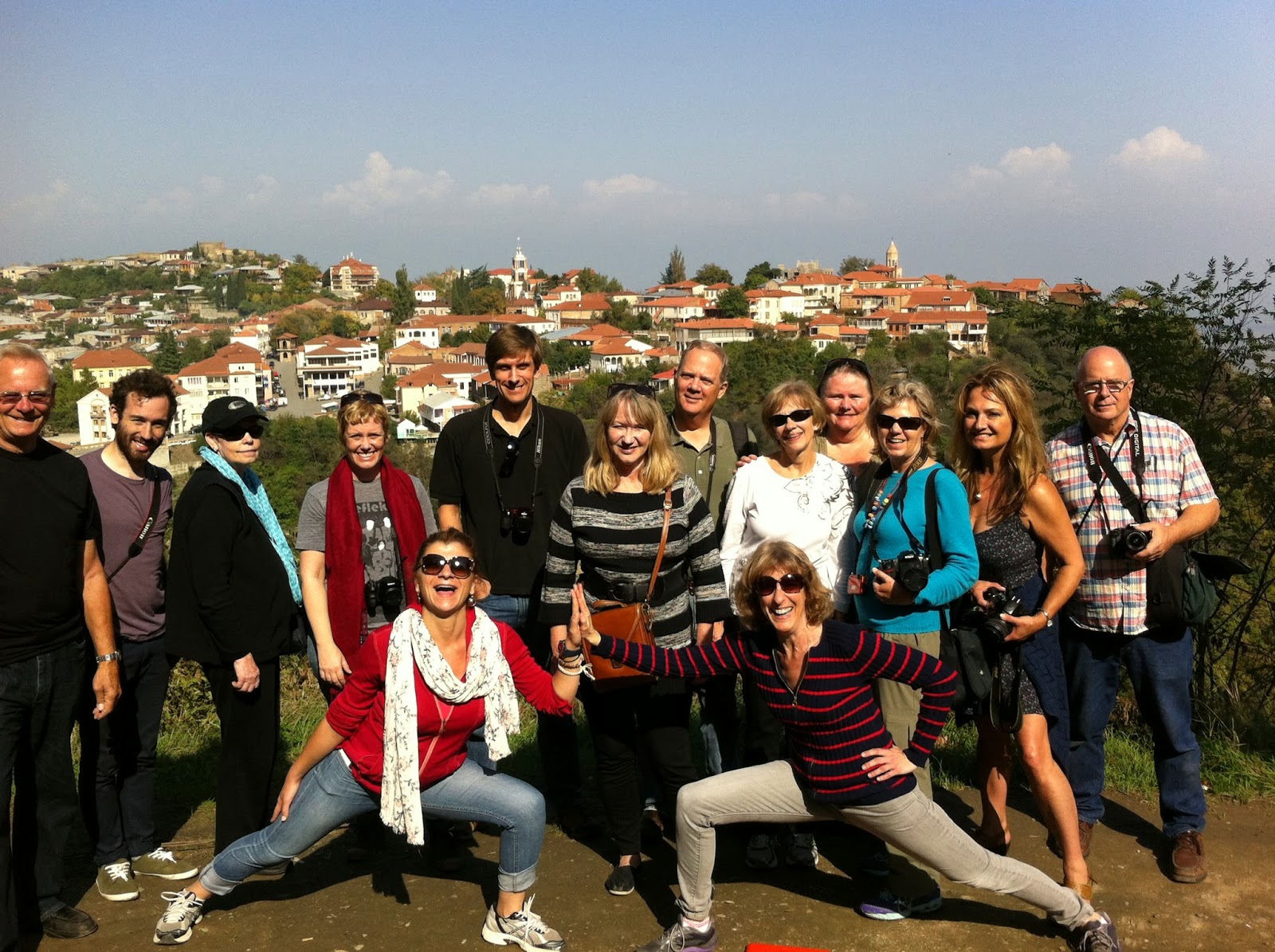 Georgia is a remarkable country; it has every asset that a destination could want from active winter skiing, both heli-skiing and the more conventional variety to a culture that is fascinating and accessible. It offers opportunities to travel on high mountain roads in 4WD vehicles, go white-water rafting on a number of great rivers and enjoy fine accommodation and a bewildering variety of incredible food and wines.

Georgia is truly a destination to be visited now; it is ready, and is the destination that we all want to visit on our worldly wanderings!
Posted by MaxGlobetrotter at 12:58 PM No comments: Links to this post

United Airlines; an excercise in indifference

I am a relatively lucky traveller; I usually fly in the pointy end of aircraft, enjoy a great deal of international wandering, and am generally one who floats through airports unscathed.

My baggage, however, is a completely different matter and the complete utter indifference of airline personnel when Bad Things Happen is eye-watering; add to that, the insouciance of the security staff, and a day at the airport can translate into blood-pressure medicine (or alcohol) in short order.

As you might guess, I am at an airport; Toronto, since you ask. At around 10.00pm last evening, Trip Case (God love ‘me) advised me that my 1445 flight to Chicago had been cancelled; the advice coming not from the perpetrator, you might note, but from a third-party.

I called United - never easy, as their voice-recognition-technology seems not to understand British accents saying tricky words like “Yes” or “Rebook my flight”, and managed to get the ticket reissued for a 7.30am departure to Chicago via Toronto. Irritating, but I am on my way.

So, perky as one might image, I arrived at the airport, lied about the weight of my carry-on luggage - well, if I gave it to them, I would likely never see it again - and headed to security. Today, they seemed to take delight in closing one of two lanes just as four of us approached, and thus added a good ten minutes to our line-up as they laughed in the manner of a Halloween Demon at our discomfort; shoes didn't need to be removed, but I did anyhow, and waited as a young screener stared at the image of my luggage for what seemed to be hours, but was in fact only about three minutes; she seemed fascinated, everything a potential threat, each item seemingly new to her experience.

Finally she let it through; I was reprimanded for something or other regarding a pile up of plastic trays that I am sure was not my fault, and dispatched on my way.

More security in Toronto; this time, two young screeners clearly infatuated with each other, and giggling sweetly ignored the pile up of bags until it was pointed out that they could delay their courtship until the coffee break; snarling, they went back to work, and we came to the planes.

I would not have thought that asking to be put on a stand-by list for an earlier flight was a trigger for venom; however, the United check-in agents were so completely dismissive of my request that I immediately left, my tail between my legs to ruminate on why travellers and those working to assist in our passage have become so adversarial.

There must be reasons, but I can’t think of them.
Posted by MaxGlobetrotter at 12:06 PM No comments: Links to this post