Adak, at the end of the Aleutian Islands

Lying at the far west of the Aleutian Islands, with only the uninhabited islands of Attu and Kiska beyond, Adak is the most westerly inhabited village in the United States. It sits confidently at 178° west, due north of Tonga and only about 700 miles from Russia. In a word it is isolated and in the middle of nowhere.

It does, however, boast two restaurants, one with a bar attached, a general store, housing for 6,000 people, two swimming pools, a bowling alley, schools from Kindergarten to Grade 12, nuclear and chemical warfare bunkers, extraordinary birdlife, pristine salmon rivers, stunning scenery, a magnificent shore line and some of the friendliest people I have ever met.

This is only partly an exaggeration; the bowling alley and swimming pools are not actually operational, but remnants of the islands rich military history, as are the endless town houses.

There are now only about 140 permanent residents, with this number swelling to about 350 when the fish plant is in full swing and the full complement of “Ecological Workers” are around. These ecological workers are a euphemism for folks whose role in life is to spot and disable unexploded ordnance, an irritation on the island, and a daily reminder of its history. 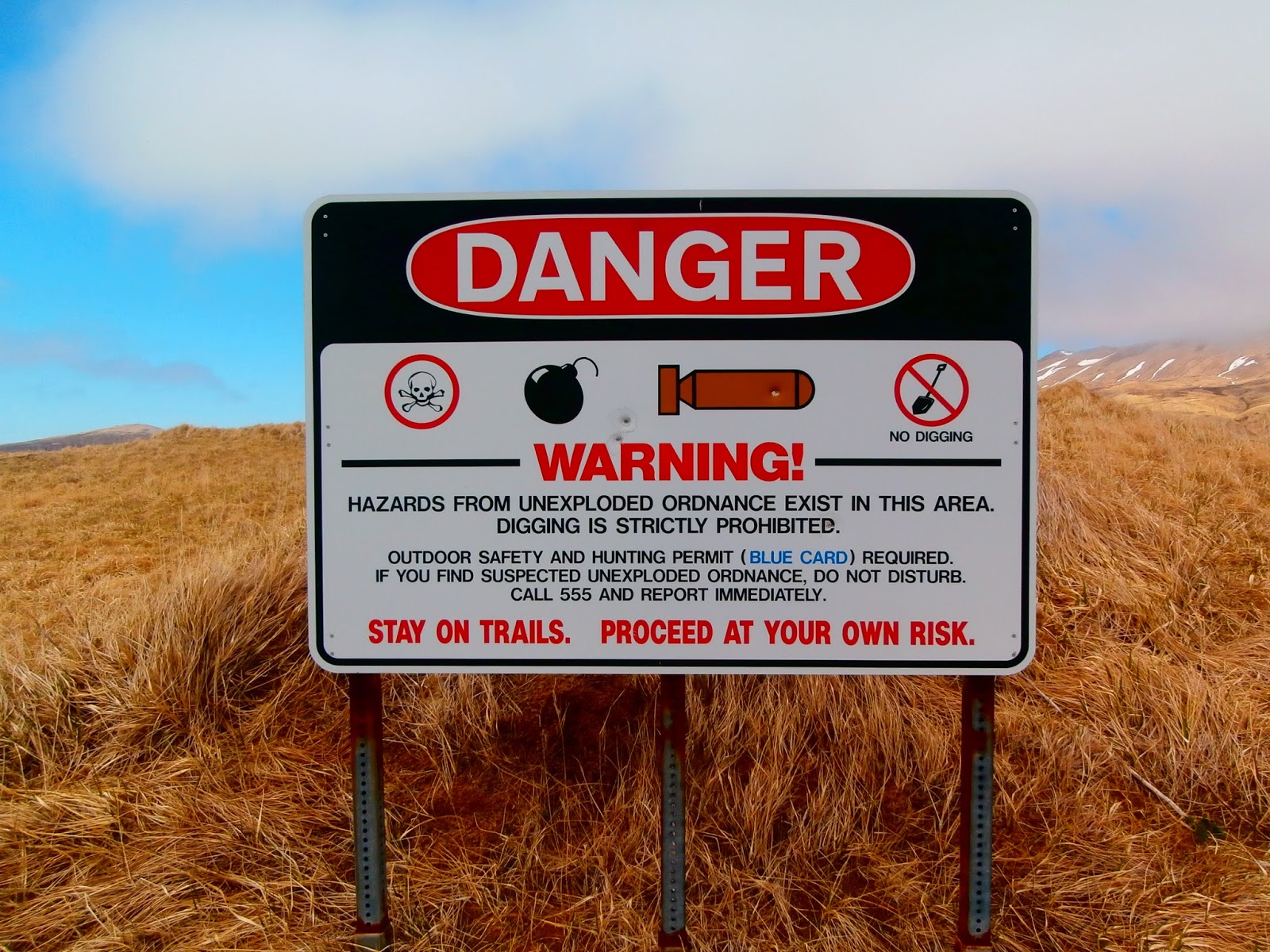 Adak was the staging post in August 1943 for tens of thousands of soldiers poised to attack Kiska, then occupied by the Japanese; the invasion never occurred, and in fact the Japanese had evacuated Kiska some weeks or months before, but the invasion force precipitated the building of a massive military infrastructure. Adak continued its military role during the Cold War, and housed 6,000 service folks (and families) in the purpose-built city. Today, the military is gone, or almost, the island has an air of intrigue and some rather shiny parabolic antennae, and only the housing and barrack remain.

It is spooky; hundreds of houses clearly delivered in several tranches. Hundreds are complete with a solarium, rarely needed in Adak where the weather is characterised by precipitation, fog and high-winds, but presumably necessary in Midway Island some 2,500 miles to the south where they were originally destined. No matter; houses are houses, and next to the selection of yellow and brown numbers (looking rather like Nanaimo bars), they are very jolly. 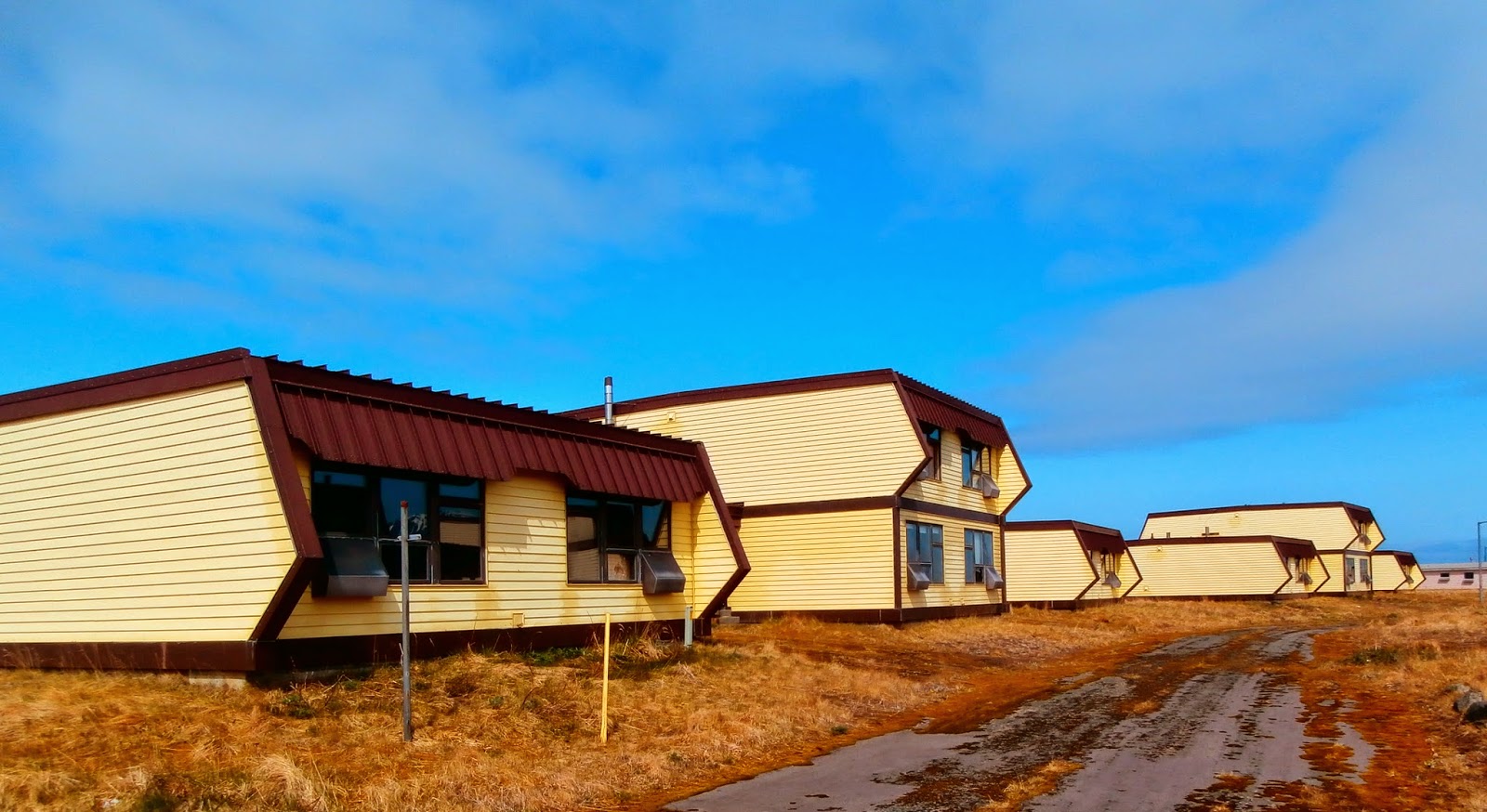 Today, only a few are inhabited, and others used for transient workers, and for use as a hotel. We stayed in a delightful town-house (complete with solarium) with three bedrooms and bathrooms, kitchen, dining room and living room.

And so to the trip; I went to Adak for two reasons: firstly, it is remote, and thus cartographically interesting, and secondly, I could get there for only 25,000 airline miles. For an 8,432 mile round trip, this has to be one of the best bargains available. It meant driving four hours south to Fargo, but it was worth every mile.

Flying west from Anchorage is a treat on a clear day; the mountains, perfect volcanic peaks were clearly visible, and in particular the peaks of the Islands of Four Mountains were quite spectacular. The flight, nearly three hours out over the Bering Sea, landed on time, and our first glimpse into this very parallel universe was the airport where we were met by our guide holding out a sign with our names. We were not difficult to spot.

Off in our 4WD truck to the town house, then to the bar for refreshment, dinner and a chance to meet the locals and a few contract workers in town to work on some house restoration.

Friendly is the word; within an hour we had met a dozen folks and hear about an Italian tourist who had come in 2006 (“or was it 2007?”), the local birds, unexploded ordnance, the uncaring government, unreliable air service, the weather (with several variants) and the school graduation due on the following day. We were given a map with all sorts of interesting places noted: Classic Wizard (?), Nuclear Bunker, Hot Springs and a radio transmitter among others, and retired for the night ready to explore. 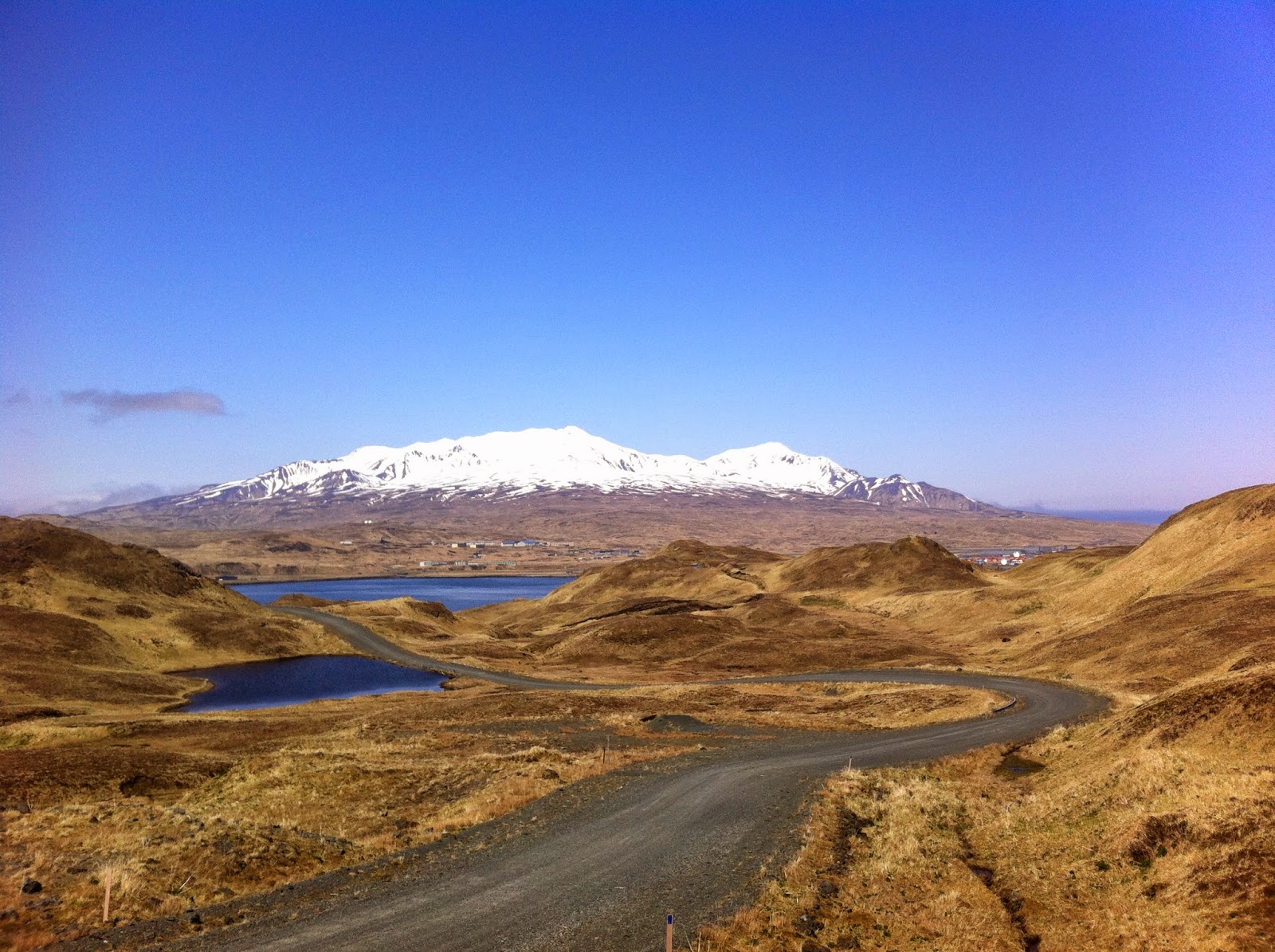 The weather, discussed in such detail the previous evening, turned out to be wonderful. Cloudy in the morning, the sun burned through by lunchtime, and then there were another eleven hours of stunning sunshine, not a weather pattern that anyone had forecast. Armed with our list, and the map that turned out to be spectacularly incorrect, we went off to explore, and explore we did. 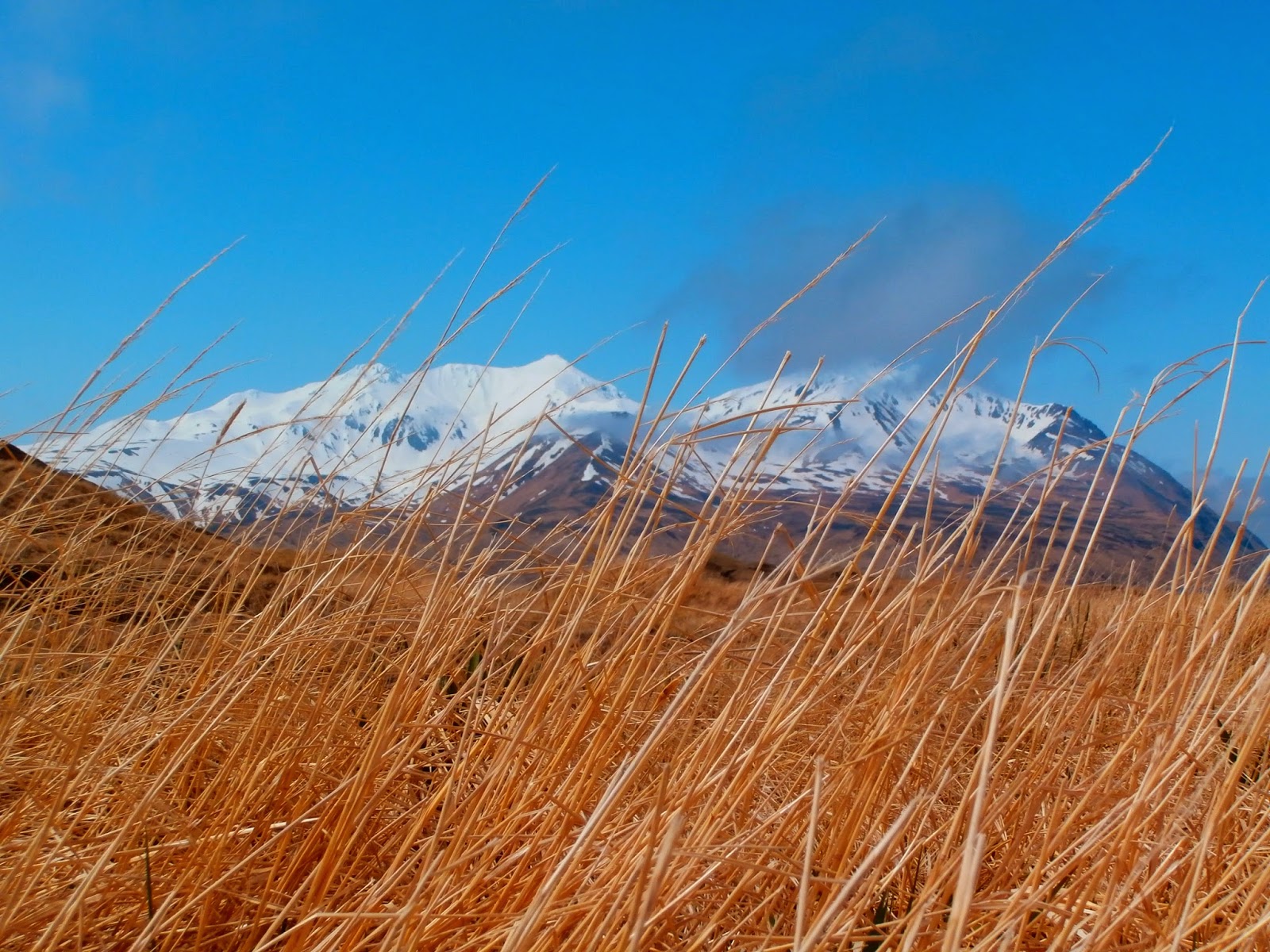 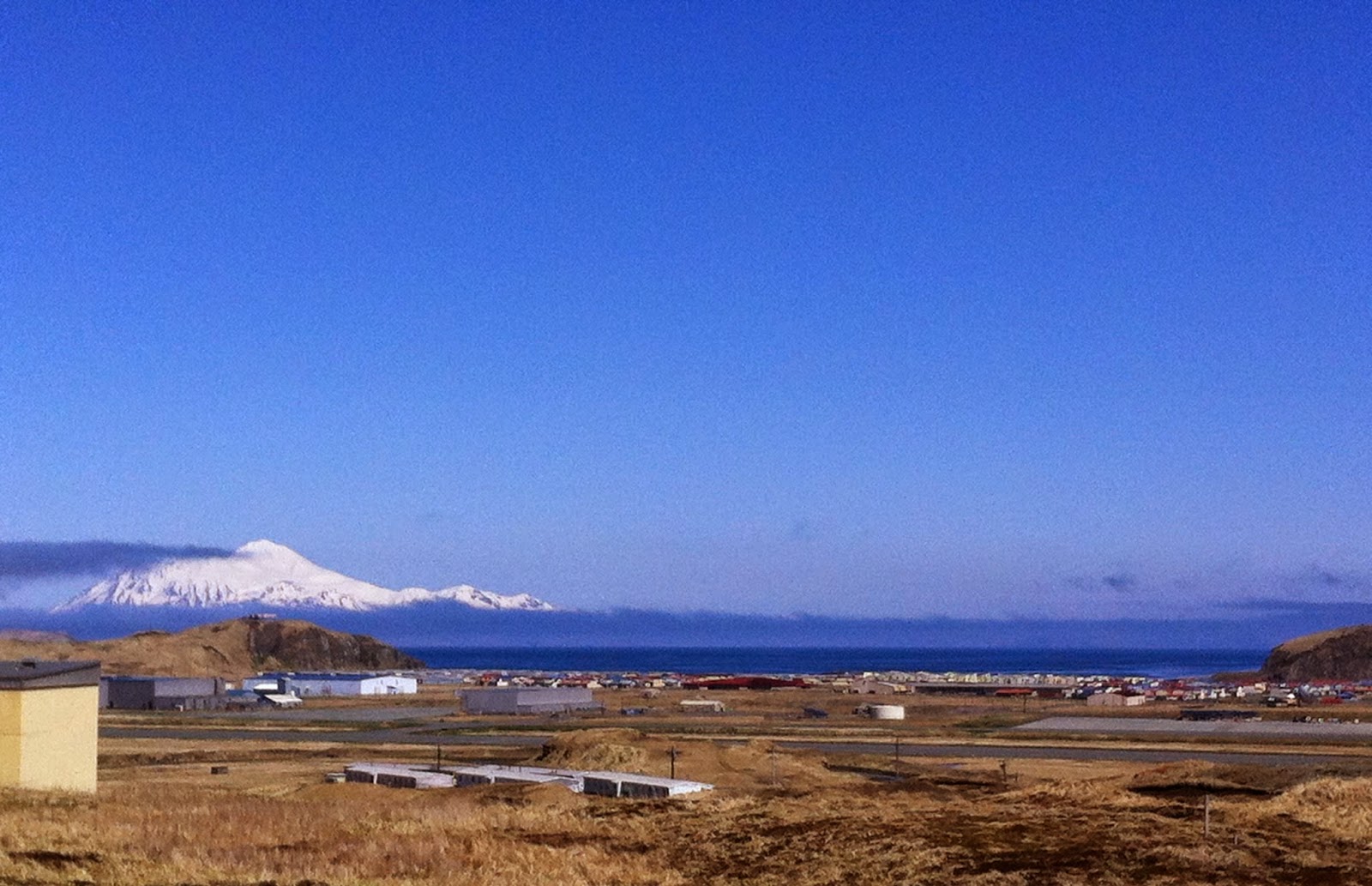 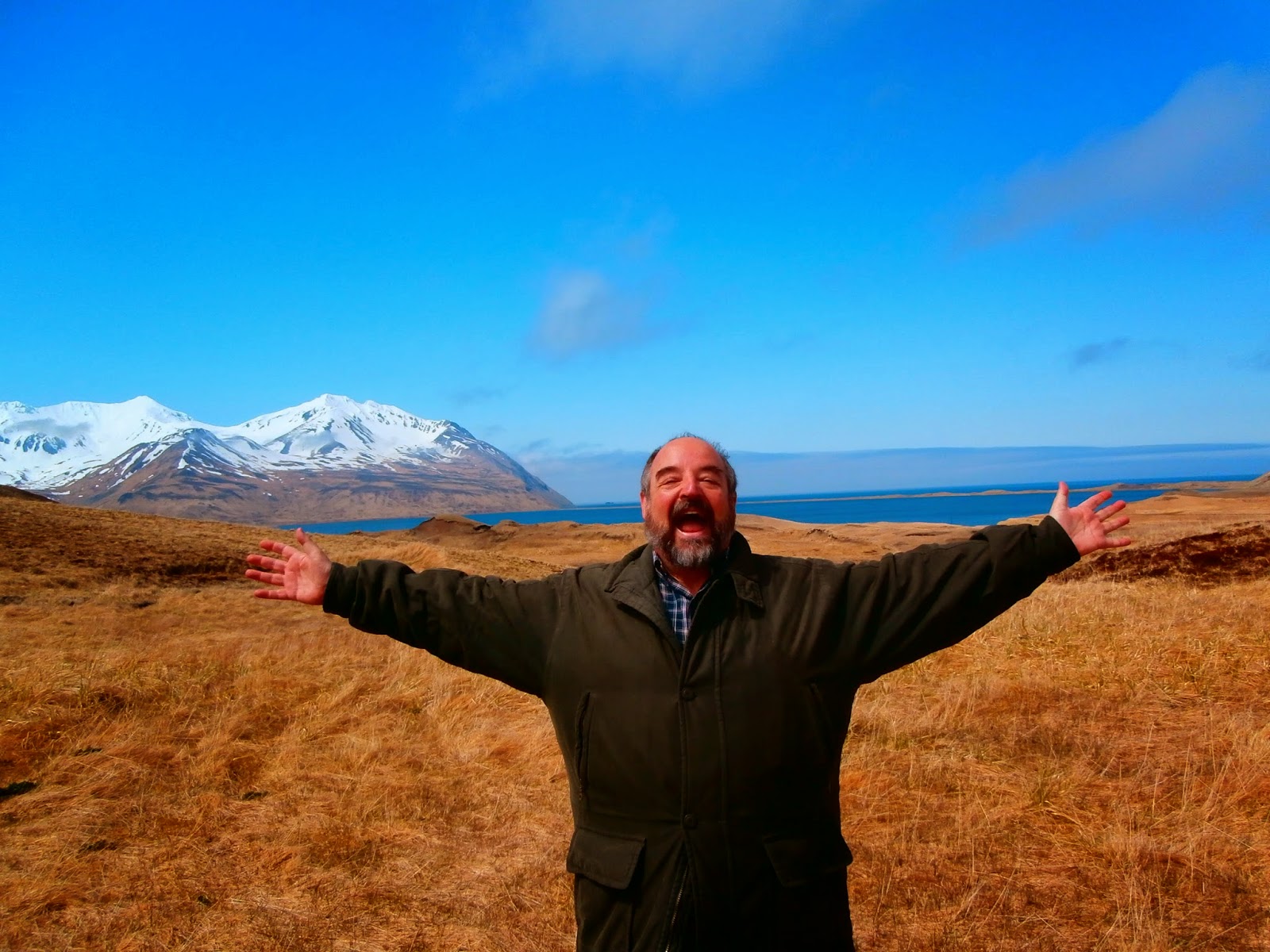 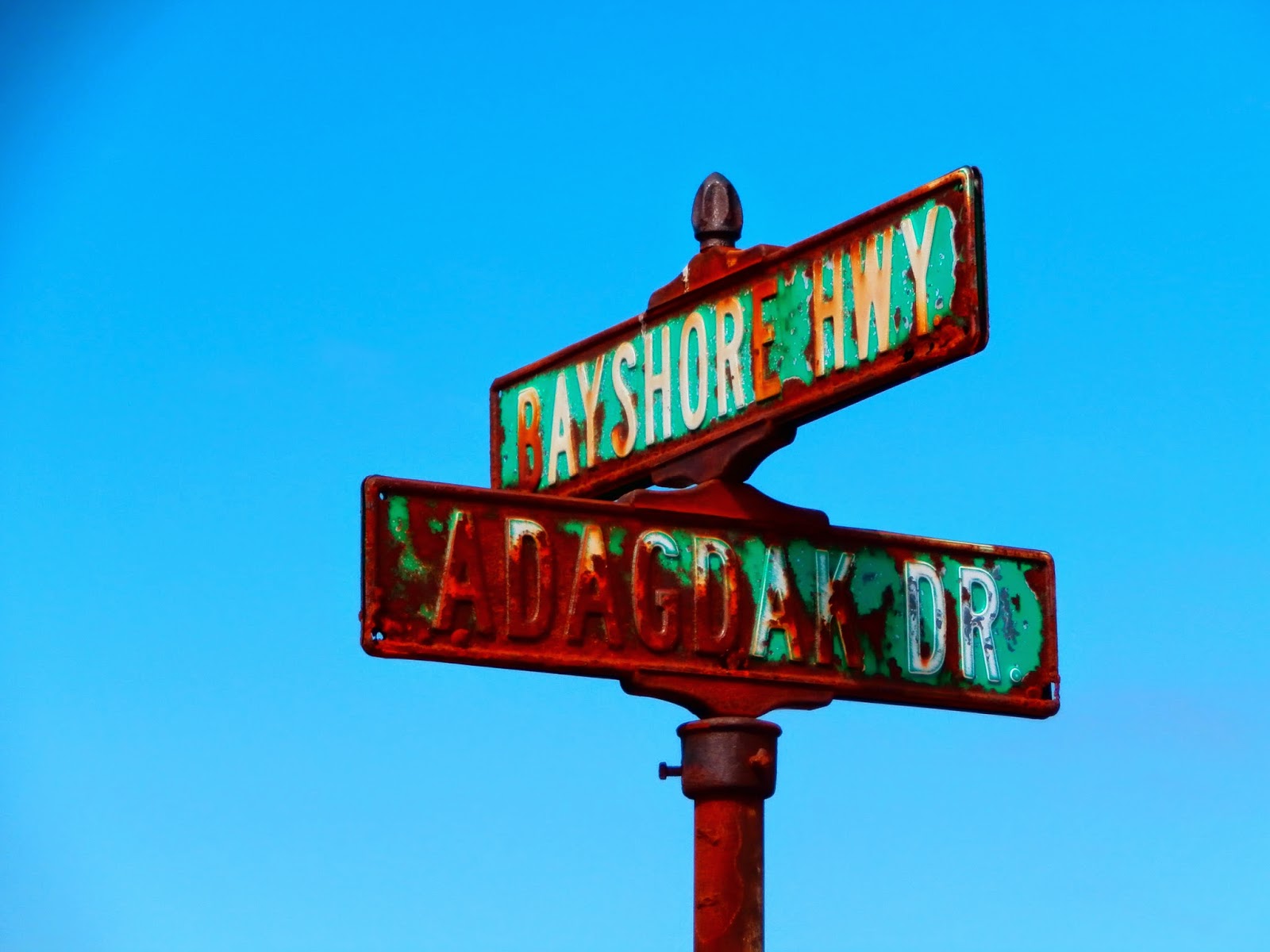 It must be said that the weather was really rather interesting; the island revealed itself slowly as the cloud lifted, and it was not until the afternoon sunshine that we realised quite what a spectacular place Adak is. The main peak in the island is Mt Moffett, a 3,924’ beauty rising out of the water on one side, and the tundra on the other. Snow clad and striking, the mountain proved more efficient than the map at assisting navigation, and was a constant reminder of the stark dangers of these remote islands. Looking at these mountains, and those on nearby islands, and realising that in all probability no human had ever set foot on them was chilling, and added to the sense of awe that Adak instills.

We headed into and out of the Adak National Forest, watched sea otters playing in Clam Lagoon, poked around inside abandoned buildings, bounced around in the pot holes (although it must be admitted that the roads were pretty good given the circumstances), and returned to town in the evening in time to head to the Mexican restaurant.

It is unusual to find a Mexican restaurant, ably run by Mexicans, in Adak, but Bay 5 was terrific, and the food excellent; pricey by southern standards, but in comparison to Canada’s arctic, very reasonable. Alaska also brews some pretty fine beer.

One would think that two more similar days would get a touch dull, but not at all. A few hours spent unsuccessfully fishing for halibut, more excursions, a trip to Finger Bay and the general wonderment at eh Google Earth moment of realising just where on the world’s surface the pin was aimed kept us busy and occupied until the very last minute. A long journey home via Anchorage and Chicago, four hours in the car and back to Winnipeg wondering whether I had really been all the way to the “End of the Chain”. 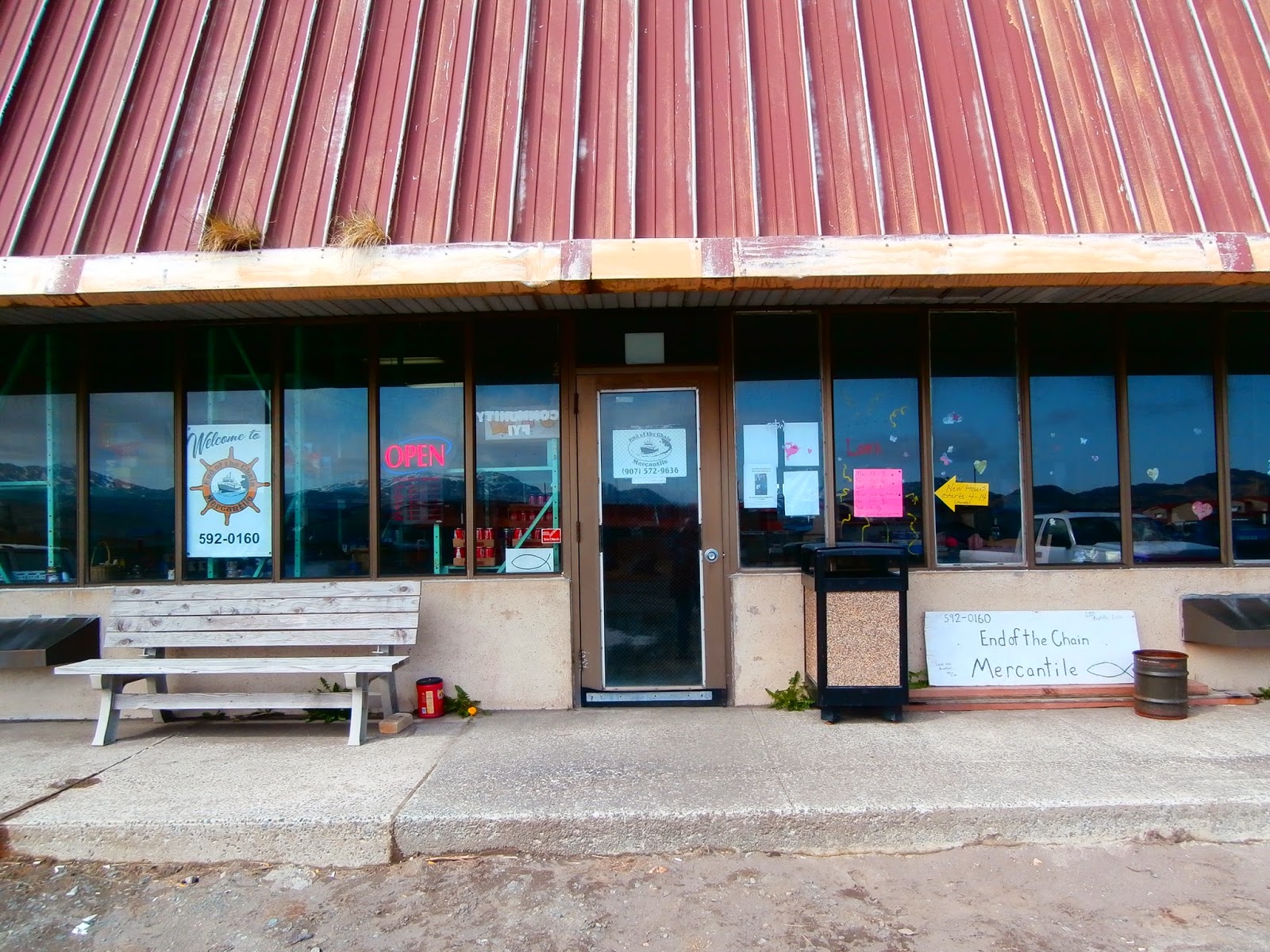 Posted by MaxGlobetrotter at 5:27 PM No comments: Links to this post

I always found it mildly amusing that in the days that British Midland flew from London to Tbilisi, their early afternoon departure was usually from a gate adjacent to Icelandair’s flight to Reykjavik. The gate, 21 I believe in Terminal 1, was a slightly odd one, as passengers for these flights were corralled into a single room, and frequently had passage from the shopping area disturbed by an inflow of arriving passengers.

Nevertheless, passengers from London bound for either or Europe’s extremities of Iceland and Georgia found themselves mingling on a daily basis. Being an aficionado of both countries, I found myself in this waiting room several times, and occasionally, bound for one, would meet a friend bound for the other.

It was arriving at Keflavik’s rather pleasant airport this morning that made me recall this curiosity, for in the last five or six years, Icelandair has grown enormously while Georgia’s aviation industry still languishes in the dark ages.

This morning, flights from a dozen or so North American cities were lined up to slide down the glide-path into Keflavik ready to mix and match their passengers for the continuing flights to a wide variety of European gateways. Their “hub and spoke” system is brilliant, effective and being Icelandic, pretty efficient. The growth in passenger numbers transiting Keflavik is eye-watering, and by offering one-stop service between such a variety of cities, their aircraft are full.

Which, of course, is just as well; Iceland itself is a wonderful country to visit, of this there is little debate. It is a country that only this year celebrates its 70th birthday of its independence from Denmark. During this period, it has grown from a very basic, subsistence economy to its current position (bankruptcy notwithstanding) of growth in so many areas of high value-added activity. There are advances in energy, genetic mapping, architecture, medical innovations and so many more; the contemporary culture of the country is vibrant, and visible in its arts, audible in its music and most certainly evident in its culinary arts.

And look where it is; the unkind among us might describe Iceland as a windswept rock, perching in the middle of the Atlantic Ocean, its inhabitants really being more akin to Polynesian islanders with a veneer of Scandinavian efficiency, and really a place for derision before investment. While there may be a smidgen of truth behind these cruel sentiments (particularly about the Polynesians, try to get an Icelander to answer an email), it belies one of the most satisfying parts of the Icelandic culture, their need to incorporate the past in the future.

It was this neat juxtaposition of attitudes that became the other element of my wry amusement of Heathrow airport’s flight dispatch; it is this passion for the past, passion for the pure integrity of the “soul” of the nation that is common to both Georgia and Iceland, and to a degree that I have rarely found elsewhere.

These are both countries that have had their fair share of troubles, and while similarities between the two will by necessity stretch the imagination, I shall mention only a couple. Firstly the deep understanding of their history, passed on in Iceland through the fabulous Sagas and in Georgia through the dogma of the Orthodox church and its attendant oral history, and secondly through the ability of each country to develop rapidly without abandoning their centuries-old culture, customs and the patina of activity that so vibrantly marks each nation.

British Midland no longer flies from London to Georgia, and the mingling of passengers bound to Europe’s extremities has, perhaps, moved elsewhere. It was, however, always a pleasure for me to see that my two favourite European countries shared a connection that was observed by so few.

I am only here for a couple of days, to celebrate the 30th anniversary of my close friend Clive Stacey's business, the London-based Discover the World, and I am sure that the celebrations at the Hotel Ranga, which is where we are now ensconced will last well into tomorrow, and possibly the day after,


Posted by MaxGlobetrotter at 12:41 PM No comments: Links to this post