Omalo to Paramaribo via Las Vegas

Georgia is, as you know, a favourite country of mine; after spending a few delightful and fruitful days in Tusheti we clambered back over the pass and down to the lowlands. Sighanagi, a delightful little town, picturesque and adjacent to some wonderful wine country, was our stop for the next couple of days. Work was discussed, plans made and projects launched - all in the most agreeable surroundings possible. 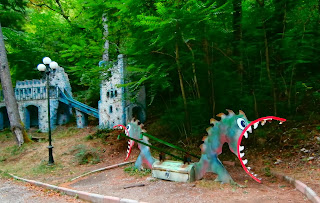 Among other programs are a Food, Wine and Culture tour and a specialist Wine program to be operated next summer. We are just waiting for the final details to be set in place and then we will start taking reservations.

Then to Tbilisi, and a couple of days in the Big City, and a bizarre day out to Borjomi; Borjomi, the town that has given its name to Georgia’s most famous mineral water has seen better days. It is a remarkable confluence of Soviet kitsch, modern and somewhat opulent construction and some really rather elderly buildings slowly collapsing from decay. The town bustles, however, with apparently happy holidaymakers and others coming to the spa for A Cure. 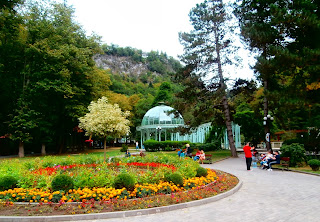 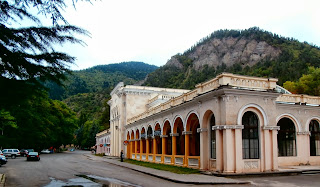 Among others, we learned, were hundreds of folks from Atkau, a particularly horrible town in Turkmenistan; it is so polluted that the employers arrange for workers to be flown to Georgia to spend ten days having their bowels scoured by some sort of cleansing mud, their lungs puffed clear and their skins brightly polished before sending them back to the inferno for another year.  Very peculiar.

And so with a heavy heart I boarded the plane back to Canada, and a few days of debriefing before I headed to Las Vegas.

Now Las Vegas is about as distant from Tusheti as one can get, and I have to say that it is not my cup of tea. It was far drearier than I had imagined, less Dubai and more Branson, I felt; acres of slot machines with rather melancholy patrons pressing buttons, and empty card table waiting for a victim. I was there, curiously, at the behest of Visit Britain who held their annual North American beano there. There were, I must add, some very interesting UK products on display, and I will get around shortly to designing a comprehensive UK tour program that highlights some of the more obscure and charming parts of my home country.

And so, fortified with tales of Wales, images of the Outer Hebrides and some rather interesting day trips in and around London I flew home for a few days of debriefing; before I headed to Suriname.

Now the trip to Suriname was fascinating, and I headed south with Dick Griffith, our Chicago-based PR agent. The three Guyanas are most interesting and to our clients, who thrive on alternative destinations, the Guyanas match Georgia and the Hebrides in interest, product and hospitality.

Two days in Paramaribo, a day on a canoe in Warrappa Kreek  exploring the abandoned plantations and marvelling at the speed that the jungle can reclaim land were the opening gambit, and lead up to flying deep into the rainforest, and two nights at the Kabalebo resort. 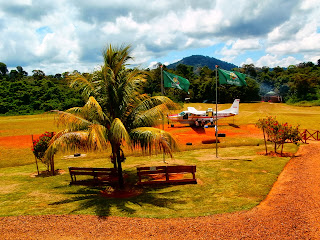 One of the hardships of my work is the requirement to visit distant facilities to ensure that they do indeed match the “picture on the packet” and that clients who we send to them will not be disappointed. Kabalebo is not disappointing in any manner at all.

Thirty years ago or so, the Surinamese government built several airstrips in strategically located part of the jungle to aid exploration for minerals, the construction of dams and other such major infrastructural projects. Kabalebo is one such airstrip, and as no industrial development was warranted, the resort has been built adjacent to the convenient runway.

It is the most pleasant airport motel I have ever stayed in. 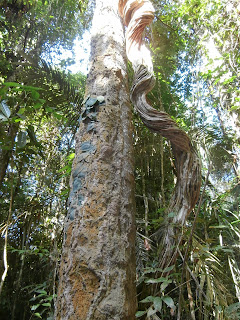 While the rooms in the main lodge are really a little small, subsequent developments have created some absolutely delightful accommodation in the jungle and adjacent to the river. Walks in the jungle are fine for a the first little while, but suddenly one realises that the walk is not in a botanical garden, and that there are real jaguars, ocelots, monkeys and other jungle-dwellers watching our every move. A rain forest is, it has to be said, natures answer to a teenager’s bedroom; it is a messy place, unfathomable to any but a resident yet full of absolutely fascinating creatures and stories. It seemed to me that the major scenario of the jungle was a long, slow-motion murder/suicide scenario. Massive trees grow; parasitic tubers gradually squeeze the life out of the trees that then die, soon to be followed by the demise of the parasite that has killed its source of refreshment. And so on, and so on ….. 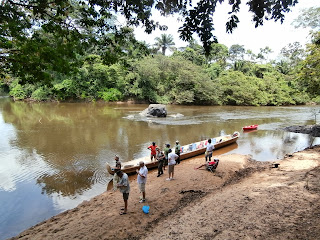 Two days at the resort were not enough, but needs must, and business beckoned from Georgetown, so we climbed on board the small Cessna aircraft dispatched to pick us up and we flew back to the Zorg & Hoop airport in Paramaribo, another fine dinner and then the short hop to Georgetown. 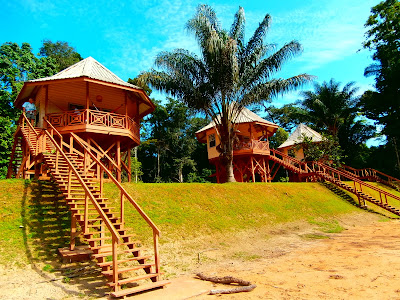 Posted by MaxGlobetrotter at 2:58 PM No comments: Links to this post